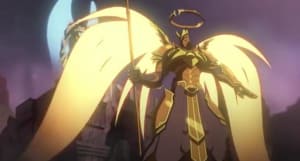 The trailer for Blizzard Entertainment's new game Diablo III has topped the latest AdNews Viral Chart, depicting a truly epic, heaven against hell battle between the angels and demons of the ancient world.

The trailer has generated over 1.4 million views and saw 6000+ shares in one week.

Chris Quigley, co-founder of the the Viral Ad Network, said the overwhelming response to this video gives a "sense of the scale and influence of online gaming communities".

Other brands featured on the chart are NovaFM, Unilever, McDonalds and Canadian Club.

The AdNews Viral Video Chart ranks Australia's most popular brand-funded videos based on a combination of views and natural sharing.

The chart is updated every two weeks based on data from YouTube and sharing activity on Facebook and Twitter. Note that the chart shows total views, not the number of views generated in the past fortnight, so entries with a higher number of cumulative views may appear lower down.