Coles' prices are going in One Direction 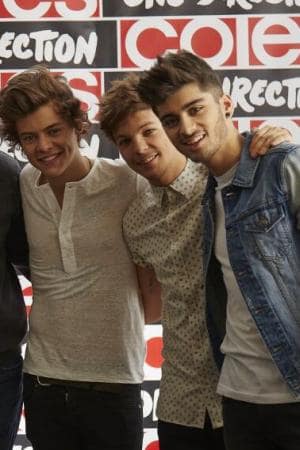 Oh boy. Has Coles gone in the opposite direction in its embrace of male minstrels? In a move sure to make the 15-year-old set faint, Coles has signed up One Direction for its latest ads.

Yep, it's official. One Direction will appear as their coiffed selves in a new Coles campaign. The details are sketchy so far. All that's known is media outlets received a box of cupcakes which spelt out "That's what makes you beautiful", which we're told is a famous One Direction song. And something about "Harry's the one everyone loves".

Accompanied with the cupcakes is a tag which mysteriously and oh-so-subtly said “Guess the new boy band at Coles”, followed by the hashtag #Coles1D. A search of said hashtag revealed the photo at right from Coles general manager marketing communications Tony Phillips which showed him with the young crooners and the message “Meeting One Direction filming our ad for huge promotion in store this Wednesday”.

Of course, Coles aren't strangers to deploying boy bands to spruik their deals. It's just that up until now, the musical artistes have been a bit more... shall we say, like a fine wine. Retro rockers Status Quo have been fronting Coles ads since last year.

We're intrigued by this new development, namely that One Direction's primary audience (the pre-pubescent and teen set) aren't really grocery buyers as such. But hey, the PR value should be enormous. You're reading this right now, aren't you?