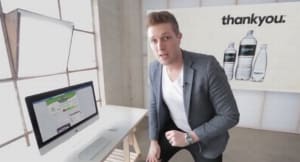 Coles has seemingly bowed to public pressure and agreed to stock the products of charity organisation Thankyou after a two-week social media campaign asking it and rival, Woolworths, to do so. It will be interesting to see if other brands try the same approach with the retail giants, or whether only a charity can attract such strong social support.

Thankyou - formerly know as Thankyou Water - is a charity brand which donates funds from its water, food and body care products to developing nations. Last week, it called on Coles and Woolworths with a social media campaign to stock its products, in the belief it would have a "tremendous impact" on the global community.

It included the hashtag #ColesandWoolworths and #Thankyou and encouraged consumers to pledge their support for the products on the supermarkets' Facebook pages. It also included online videos from the company and messages from public supporters including Jules Lund, Chrissie Swan and Dylan Lewis.

The brand also took to the skies to promote its message with two helicopters flying the banner: “Hey Coles/Woolworths, thank you for changing the world! (If you say ‘yes’)”. It flew them over Coles’ Melbourne headquarters in Hawthorn and Woolworths’ Sydney headquarters in Bella Vista.

The campaign appears to have worked. At least, in the case of Coles. The supermarket has announced it will stock the products, with Thankyou claiming it took them "only hours" to go ahead with the decision.

Coles chief operating officer John Durkan said: "We are delighted to be adding the Thankyou range to our offering for customers. Not only will it raise funds for essential projects in developing countries, but they are also great products.

"We've listened to our customers, who told us they would support the Thankyou range if Coles stocked it. Now they'll have the chance to do just that and make a difference with every product they buy."

Thankyou co-founder and MD Daniel Flynn said: “Veterans of the retail industry advised us that, even if we were able to convince Coles of the considerable benefits of stocking our products, we’d be lucky to get a product approved before Christmas. I think it’s safe to say we were surprised to receive a call only five hours after the meeting finished.

“It’s a surreal feeling. We’ve spent over a year developing the range and working on campaign strategy. This whole exercise was a massive risk for us, and it really could have gone either way. It’s been amazing to see thousands of Australians post on both Coles’ and Woolworths’ Facebook pages in support of the Thankyou range. We’ve been blown away by the level of support."

Flynn also said the brand had set a goal of 10,000 YouTube hits for the campaign. It registered over 70,000 views.

Thankyou - which works with organisations including World Vision, Red Cross and Oxfam - said it was meeting with Woolworths tomorrow (Tuesday 30 July 2103).