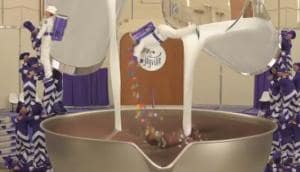 In less than a year, Cadbury's Marvellous Creations range has managed to claim 6.5% share of the total chocolate blocks market. Not bad for a brand launched mere months ago.

All in eight months. The chocolate range, which features jellies, popping candy, nuts and more, only hit the market in May last year.

Marvellous Creations' rise has been helped along by Cadbury's high-profile 'Joyville' campaign, which enjoyed its one-year anniversary this past week.

And Cadbury is not done yet. Wicks said there will a new product launch under the 'Joyville' banner in the second half of the year but won't reveal any details yet.

“All of our equity metrics, such as propensity to buy, are heading in the right direction because of 'Joyville'. It's meeting all our targets,” Wicks added.

A new campaign to be unveiled next month will promote the changes to Cadbury Dairy Milk range with nuts and the extra 10% in size. It will run heavily throughout May and June but will be on-air sporadically throughout the year.