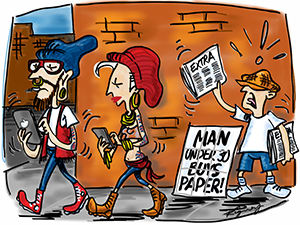 Read all about it...

If they haven't replaced religion in Australia, smartphones and tablets are closing fast. For a third of Australians, accessing mobile content is the first thing they do in the morning and the last thing they do at night.

That's according to the latest survey data from WPP-owned research firm TNS. The company surveyed 55,000 people in 55 countries, with the sample around a 1,000 in Australia. The company presented findings at the DNA 2014 in Sydney today.

The extrapolated data suggests smartphone penetration in Australia is now 75% and the average Australian now has five connected devices. Sounds high? New TNS boss Alistair Leathwood agreed, before pointing to the set-top box, the mobile phone, the tablet, the laptop, the Kindle, the games console, the iPod connected to the home stereo. “Does anyone else have to fight the family for the charger in the evening?" he asked.

The survey also found the best time to sell goods online is on a Sunday morning - possibly why eBay has just started a no-nonsense campaign called 'eBay Big Sundays'.

Whereas 'showrooming' (checking out a product instore and buying it cheaper elsewhere) had increased incrementally from 43% in 2013 to 47% in 2014, buying stuff is ironically becoming more complex, despite technology at most people's fingertips. So-called touch points keep multiplying, said Leathwood, with more devices and with people checking customer reviews, price comparison sites and social media across multiple screens (not to mentionoffline word of mouth, i.e talking to people).

There was only one day part when more people are watching TV than online, he said “dinner time”. Average TV consumption was 2.2 hours, according to the survey data, he said.

But even then, around half using other devices when watching TV. “54% of TV viewing is just TV. But 46% is second screening while watching TV. Undivided attention is a rare commodity," he said.

Tablets are now at around 46% penetration, he said, up from 21% in 2013. “It took TV decades to achieve that level, and it took mobile phone 14 years. It took tablets four. Anybody fancy investing in wearables right now?” Leathwood asked.

That said, he was not convinced they would “make a big difference to society”.

“I felt that they are a solution in search of a problem and I'm not sure that we have found that solution yet. I use it to track sleeping patterns. It turns out I sleep fine. It's a bit like when you get a councillor and they ask if you are stressed, a bit tired. You say yes. They say there must be something wrong with you. But I'm not sure there is. That's just... kind of life.”

Leathwood slightly unsettled the audience when he said he had been photographing them every 30 seconds via a wearable 'lifelogger'.

Women friends “usually do their hair, when I tell them about it,” he said, whereas blokes pull stupid faces. But he mainly just uses it to remember where he put his car keys.