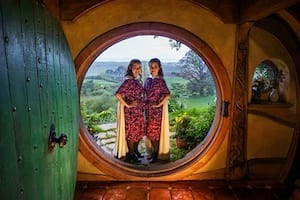 Air New Zealand is rolling out a global campaign as part of its partnership with The Hobbit: The Desolation of Smaug, the second in the trilogy of Hobbit films. The aim is to scotch the myth that New Zealand is at the ends of the earth, boost tourism and therefore bums on seats.

The activity, called ‘Middle-Earth is Closer Than You Think’, gives three fans the chance to attend the world premiere of the film in Hollywood on 2 December, and a separate “once in a lifetime” trip to New Zealand.

To enter, fans need to watch Air New Zealand’s Hobbit-inspired video, which launches on TV and online today (20 November). The video features Kiwi Dean O'Gorman, who plays dwarf Fili in the film, and the voice of Sylvester McCoy, The Hobbit Trilogy's Radagast the Brown.