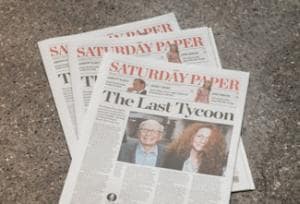 The pace of online news and the 24-hour cycle is killing off news and journalism, according to Erik Jensen, the editor of a new newspaper, The Saturday Paper, which is hoping to reverse the trend with its long-form, deep journalism.

The Saturday Paper, to be published by the team behind The Monthly, will debut in the first quarter of 2014.

“We believe we've found a model where print can be vital and sustainable,” Jensen told AdNews. “Look at what newspapers can do well – deep, definitive journalism that doesn't seek to be first but the best.

“Our model will repair some of the damage that's been done to print. The pace and pressure of news today is taking journalists away from the kind of journalism they should be doing, which is an analytical account of news.”

Jensen argued The Saturday Paper will hopefully correct some of the damage that's been done to journalism due to current focus on quick, fast news and the scale of website clicks-through.

He said there are audiences who are frustrated and feel they haven't been getting the kind of news they're looking for, and they are the people The Saturday Paper will be going after. “There's a broad spread here. People who perhaps have never been newspaper readers, this is conceived for them. [Readers who are] upwardly mobile and engaged and they're not getting what they want from the news cycle,” he said.

He said this is the viable model for print journalism of the future and added the publication should be profitable within two years of launch. The Saturday Paper will also have a website with a metered paywall and an app.

Jensen is a former Sydney Morning Herald journalist and has won the Walkley Award for Young Print Journalist of the Year. He declined to reveal what staff the paper has recruited. He's also keeping close to his chest who the launch advertisers are.

Jensen said there will no cannibalisation of The Monthly's and The Quarterly Essay's readers who have “been saying they want more of the content we produce, not less”.

The paper itself has been designed as a “luxury product”, according to a statement from the publishers, with heavy stock, marquee contributors and design by Studio Round. In addition to news analysis and long-form journalism, it will feature lifestyle content and arts coverage.

“While some in the industry have convinced themselves of terminal decline, I believe an audience exists for a new player to come in and do journalism better than anyone else. I am launching this newspaper because I know it will work.”