The enviable Aussie startup - Canva on the precipice of 10m users 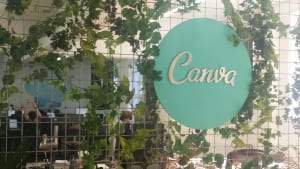 The headlines about Canva have been splashed Jackson Pollock-style all over the internet: “Movie stars Woody Harrelson and Owen Wilson back Canva's $15m funding round”, “Canva named the 2015 Coolest Company in Tech”, “Australian online design platform Canva raises US$15m in Series A”.

Cynics might balk, but the headlines, as unusual as they might read for an Aussie startup, are true. It’s likely that if you haven’t directly encountered Sydney-based Canva, someone in your organisation – a creative, or designer maybe – has.

An online design tool, Canva gives you the ability to create almost anything - posters, cards, and so on - by utilising its incredibly intuitive and easy cloud-based system, without the skills necessary to operate a package like Photoshop. Now Canva has arrived, it seems shocking the internet survived so long without it.

The story - as the firm’s chief evangelist Guy Kawasaki (yes, him of Silicon Valley/Apple fame) so readily states - is memorable. July 2012: Canva CEO Melanie Perkins was teaching graphic design programs at university and found students struggled to learn the basics. Partnering with co-founder Cliff Obrecht, the pair launched Fusion Books, an online design tool that made it easy for students and teachers to create their own yearbooks.

They soon realised that the technology they had developed could be used much more broadly, and paired with tech co-founder Cameron Adams to launch Canva in beta in August 2013. By October 2014, just a little over a year later, it had hit one million users. It amassed a further nine million users in 2015 and will reveal in coming days that it has surpassed the 10 million figure.

Building an audience of 10 million in such as short space of time is enviable, and perhaps only achievable if your product is a SaaS (software as a service) product. However, what is fascinating is how Canva rounded up so many users off the back of a strategy which was pinned on three tenets: SEO, branded content and a smattering of tactical PR. No above-the-line, no paid media, no agencies.

Anna Guerrero is Canva’s growth marketer. She explains that the strategy in the first year was to ensure the product was as robust and as easy-to-use as possible. That in itself was enough to take Canva to the first level where it had collected one million users.

“We did very little at the start,” she explained. “We went along organically. The work the product team had done had really paid off, but it was time then to sit down and figure out, ‘Ok - how do we scale these efforts'?”

Scaling Canva was first and foremost achieved by SEO. But, as Guerrero states, SEO changes all the time. Fortunately for the company, the way search results are prioritised often depends on the quality of the results and the quality of the product, so that buzz that was created in the previous 12 started to pay off.

However, relying on the core audience – described by Guerrero as often people who are social media managers and bloggers – was never going to take the startup to the next level, simply because the numbers aren’t there.

Guerrero explains that in the first year, everyone who had signed up to Canva had heard about it via word of mouth – what the company calls 'branded traffic', but then there was 'unbranded traffic' – people they knew would like using Canva, but they weren't necessarily searching for Canva because it was a company they wouldn’t have heard of.

To reach those people Canva adopted a very clear branded content strategy; one that still sits at the heart of the company’s marketing efforts. Now the blog has more than a million monthly visits.

“It's an interesting one, notes Guerrero. “It only works if it's done well and if the content is really great. While content marketing is a slower return, it's a good, strong return.

“We used similar concepts to SEO – what were people who would use Canva doing right now- what blogs were they reading, what were they searching for? We did a lot of research into that and we created an editorial calendar which delivered on certain topics we felt would resonate well with people, or would find interesting or useful.

“Of course,” she said, “there was a lot of emphasis on shareable content.”

The focus on the shareable, on online word-of-mouth, saw traffic soar through the roof and as people engaged with the items of branded content, SEO picked up too.

As an Australian company – away from the reflected glare of Silicon Valley – Canva has also been astute in adopting a more traditional PR approach: appointing Kawasaki as ambassador; devising a corporate culture which has been the subject of news reports on the ABC and in the Australian and even putting itself forward for ‘cool company lists’ as published locally by the Daily Mail - all obviously a play to become a household name.

Wesley Chan - partner at Felicis, a leading US fund with investments including Fitbit and Rovio - led Canva’s $22 million series A round last year. At the time he said: "When we first began meeting with Canva, they told us they intended to have three million users by the next time they spoke. Next time we spoke, they had six million. These are incredible high-growth numbers for any early stage company, and they've continued to increase their growth rates since."

Comments such as that almost give enough weight to the term ‘Australia’s fastest startup’. There are few others in the market commanding such high numbers. It will be interesting to watch where the content strategy takes it next.