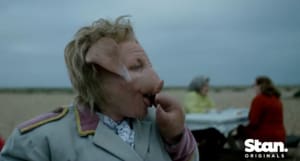 Priscilla Queen of the Desert dances onto Blue 449's books

Blue 449 has extended its relationship with Michael Cassel Group and has won media duties for Priscilla Queen of the Desert – the group's latest production. The account bills $2million and will include media strategy, planning and buying across all channels, including analytics. The Michael Cassel Group was formed to produce and present theatrical productions; to create and develop new live entertainment experiences and to present marquee events and concert attractions. The company exclusively represents theatre producer Cameron Mackintosh and his productions in Australia. Blue 449 has been the media agency for Michael Cassel Group since 2015 and worked on Les Misérables and Kinky Boots.

Amazon got its mitts on it in the US and Channel 4 bagged it in the UK, so it's no surprise Australian streaming player Stan is ramping up on the promos of its original show, Electric Dreams. Stan has released the first trailer  for the anthology drama series based on the short stories written by award-winning sci-fi novelist Philip K. Dick. Executive produced by Oscar nominee Bryan Cranston, Stan says it will continue to ramp up on it rapidly expanding 'Stan originals' slate as it continues to go head-to-head with the likes of Netflix and Foxtel Now. See: Stan CEO: 'We're the home of Hollywood hits and welcome Amazon'

The finalists in the 29th annual Australian Commercial Radio Awards (ACRAs) have been revealed with the biggest names in radio battling it out for the hotly contested Best On Air Team in both the AM and FM (metro) categories. Last year’s winners in the FM category; Nova Entertainment's Kate, Tim and Marty, are again among the finalists that include, five-time winners Kiis 1065's Kyle and Jackie O Show; Hit Network's three-time winners The Hamish & Andy Show, who have announced they are leaving radio at the end of 2017; Fox FM's Fifi, Dave, Fev & Byron show; Nova's Chrissie, Sam & Browny and Kiis' Hughesy & Kate. A highlight of the ACRAs is the announcement of the Hall of Fame inductee, acknowledging a lifelong commitment to and achievement in the Australian radio industry. Past Hall of Fame inductees include John Laws, Bob Rogers, Neil Mitchell, Frank Hyde, John Brennan, Paul Thompson, Janet Cameron, Graham Mott, Peter Harvie and last year’s inductee Cathy O’Connor. Organised by Commercial Radio Australia, the national awards cover 33 categories. See all finalists here.