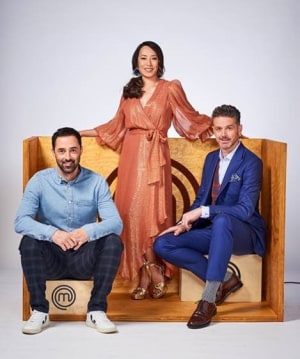 The trio, who finished their first season as judges last night, were brought in to replace popular judges Matt Preston, Gary Mehigan and George Calombaris after the controversial exit of Calombaris who was fined for underpaying staff by $8 million.

The current season has attracted high ratings for Ten, reaching more than a million metro viewers throughout the season. Now, Zonfrillo, Leong and Allen will return later this year for the first Junior MasterChef season in nine years.

“It’s been nine years since we last heard the rattle of pots and pans with brilliant young Australians at the pass,” says Network 10 head Of drama and executive production Rick Maier.

“High time for a recall, we think - especially at a time when families are sharing more and more adventures in the kitchen together.

“With Melissa, Jock and Andy in charge, we’re all looking forward to discovering the next generation of Pohs, Reynolds and Callums. Their time starts now."

Junior MasterChef Australia will search for cooks across the country aged 9-14 years old.

“To be showcasing a generation of kids who have grown up with the show and who have literally been cooking for most of their lives, you know this is going to be spectacular,” says judge Melissa Leong.

“Jock, Andy and I are very excited to meet our incredible little cooks, and to see what the next generation has in store."