Moments goes live in Aus; aims to be a 'new way of mobile storytelling' 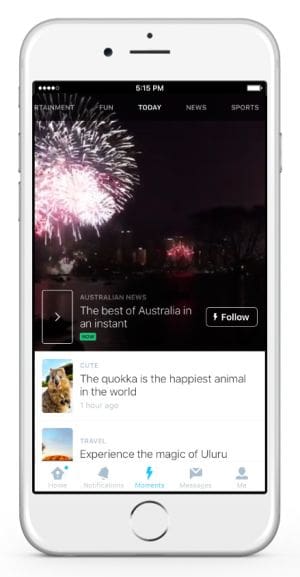 Twitter has officially launched its news and content curation offering Moments in Australia, with the social network already inking deals with local publishers and sporting organisations to get them using the service.

Organisations such as ABC News, Buzzfeed, The Project, The AFL and The NRL are launch partners for Moments, which will see their tweets collated a displayed as part of different verticals such as, entertainment, sport and news.

Moments has a local and global editorial team behind it, who are responsible for putting together the individual Moments. From today, users in Australia will be able to see a lightning bolt in their home bar in the Twitter app and by clicking that, users will be able to experience Moments.

The offering first rolled out in the US late last year, in an attempt to get both logged in and logged out users engaging with the content that is created on the social platform.

Speaking with AdNews ahead of the local launch, global curation lead, Andrew Fitzgerald says that since the offering launched in the US there has been a lot of people interacting with Moments.

“We've seen a lot of interaction with Moments with the things we know people come to Twitter for, so news content, to hear from directly from celebrities, announcements and those fun, only on Twitter conversations, which drive a lot of interest in Moments.”

While Fitzgerald explained that the main focus of the global Moments team is just to continue to drive content discovery, he explained that when it comes to monetisation of the offering brands are able to have promoted Moments, which are similar to the platform's promoted tweets and trends.

“We've rolled out in the US, UK and Brazil, and we've launched a promoted Moment strategy for brands,” he says. “Marked the same way a promoted tweet would be marked, there's some really creative use cases for brands. Moments is a new format for mobile storytelling, and that's absolutely true for our teams of curators who are starting to experiment with this format.”

While it's only early days, Fitzgerald says that there's been a lot of enthusiasm when it comes to brands using promoted Moments, indicating that the offering could be a strong driver of Twitter's mobile ad revenue.

While there will be no announcements today about local advertisers using Moments, it is understood that an announcement about a brand coming on board in Australia is just weeks away.

Australian curation lead, Luke Hopewell told AdNews that the local team is excited to work with its local partners to not only to connect with those publishers but to also help them further build their community on Twitter. He also explained that the team are able to lean on the global network to ensure the content offering really never sleeps.

“We have a handful of curators with journalistic backgrounds supported by a really fantastic international team. So it really becomes about following the sun, we want to make it a 24/7 property. The sun never sets on Twitter, so the sun never sets on Moments,” he says.

On being a launch partner, chief digital officer for the NRL Rebekah Horne says: "The NRL is excited to work with Twitter Australia for the launch of Twitter Moments in Australia. The opportunity to curate our own official NRL Moments will enable us to reach an even bigger audience of NRL fans on Twitter, while also enabling us to publish high quality club, fan and official social content on nrl.com via embeddable Twitter Moments."

Australia editor for BuzzFeed, Simon Crerar agrees saying Buzzfeed want to report news and tell stories wherever its audience are, and Buzzfeed emphatically views Twitter as a place to do journalism, not just a service to send visitors to its website.