Language and definitions are defining factor in tackling transparency 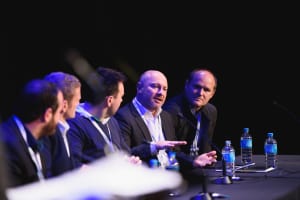 Speaking the same language and landing on agreed definitions for things like viewability across the industry is key to tackling some of the issues around the transparency crisis, according to a panel at the AdNews Live! Tackling Transparency event in Sydney yesterday.

The first panel of the day, chaired by IAB senior consultant Jonas Jaanimagi, looked at the “murky” digital ecosystem. The first mooted solution touched on getting the industry aligned over standard definitions.

Nick Durrant, News Corp national head of trading, says: “This is more about coming up with a single language. At the moment we don't speak the same language [and] even at this table we all have different definitions of things like viewability - it means different things to different people. I think to me this is about constructing a single language which then forms the basis of what we can all talk about.”

The definitions being pushed in the US by Marc Pritchard are the MRC’s definitions, and that’s what the IAB has adopted here. Not everyone agrees on them, but they do provide a baseline.

Integral Ad Science MD James Diamond, adds: “There are a few issues that need to be addressed. Viewability is one. If we have separate definitions, what happens when one advertiser goes from agency A to agency B? Does their whole historical data set change? Do they need to change the way they're trading? If they go to a publisher and want to buy 100 viewable impressions, the publisher needs to know instantly what that means.

“We can’t have a look-up table of what viewability means to every advertiser and agency. I’m a big fan of one definition, that being the MRC definition. It could be that the MRC has got it wrong, and maybe it needs to change, but we need to work with the MRC to come up with new definitions, not come up with separate definitions ourselves, which makes it very difficult to trade on viewability.”

Earlier in the morning, NAB CMO Andrew Knott outlined his view that the current IAB definition of viewability (which is the MRC standard) does not go far enough, but offers a “baseline” to start from.

GroupM last year introduced its own definition of viewability, which is stricter than the MRC’s and promises clients what it calls 100% viewability.

Vote on how you think the industry should tackle transparency here

Not everyone was convinced that a standard definition is possible - even if the intention is there.

Tim Egan, Facebook regional product marketing manager, says: “One of the places it becomes challenging is using the same definition across different placements. Going from desktop into mobile into Newsfeed. Can you say that using the same definition takes into account consumer behviour and the way people are consuming media in those environments? It’s all digital, but it’s all different. That part of the challenge is to evolve the MRC definitions to incorporate consumer behaviour.”

GroupM’s John Miskelly is also in favour of a single definition - namely GroupM’s. He says going down the “rabbit hole” of different definitions meant “we’d never get anywhere”.

“There’s talk of the value, but there has to be something where we can draw a line in the sand and say ‘this is table stakes’,” he says.

Diamond said that while “it pained him” to say so, he concedes GroupM’s definition could be the better definition, however what is important is the industry has a consistent and agreed upon standard.

The Guardian's Tony Bell summed it up: “If we can’t get to standard definitions, we’ve got no hope, have we.”

The four solutions up for debate on the panel were:

You can read and vote on the 10 solutions here. We’ll be publishing a broader report looking into the debates and the outcomes of the voting over the coming weeks.