Australians do not trust Facebook in the wake of several scandals.

Facebook is the most distrusted media brand in Australia and among the top 10 distrusted brands of any sector, according to Roy Morgan’s latest Net Trust Score survey.

Despite the study's findings, Facebook says consumers aren't pulling back from the platform.

In a report released today, Roy Morgan says Aldi is Australia’s most trusted brand - for the second survey in a row. Bunnings is ranked in second spot, followed by Qantas and then the ABC.

Roy Morgan asked 10,000 Australians to nominate the brands they trust and distrust to establish net trust score for brands. The July survey is the fifth carried out since last October.

According to Roy Morgan CEO Michele Levine, Facebook is another example of how skyrocketing distrust has a material effect on brand value.

“Facebook’s earnings dropped and its share price plummeted, wiping $US145 billion off its market value,” she said.

“We expect Roy Morgan to have a more balanced and independent view before making these comments. The comments around users and advertisers are not correct and very misleading to the market,” Easton says.

“None of the apps have declined.”

Easton says Facebook, as well as Instagram, have continued to see growth over the last six months in Australia.

“Trust is important and we are working hard on improving this. We’ve made great progress in preventing abuse, fake news, and protecting people’s information, and we’ve undertaken a nationwide advertising campaign to educate people on what we are doing," he says.

As a company, Easton says it is building for the long term, making significant investments in safety and security, and hiring more than 10,000 people to work in these areas. From an advertiser perspective in Australia, Facebook has more than 350,000 advertisers.

A recent PwC white paper stated that more than 120,000 jobs have recently been created by SMBs in 2017, in correlation to their growth on Facebook, which it says represents more than $16.4 billion of economic value. See the report here.

Does 'Here Together' work?

To combat the fallout of Cambridge Analytica, Facebook rolled out a major national ad campaign, Here Together, in April to win back the trust of consumers by addressing issues of online safety, privacy and the brand's integrity.

The ad was discussed on the ABC's Gruen earlier this year.

One Green Bean managing director Claire Salvetti said that Facebook can't get away by merely saying "something happened" when Facebook allowed app developers to harvest user data without users having any knowledge of what their data was being used for.

"When Facebook talk about it like 'something happened' to them, it's essentially implying that they're a victim," she said on the show (fast forward to 6 minutes). 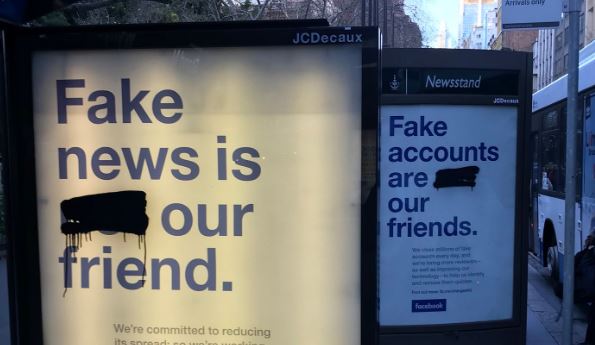 Facebook's campaign was defaced after it launched across Sydney

"What they should have done is owned up to it and gone, 'here's what really happened' transparently. Transparency drives authenticity and authenticity is what you need if you want people to trust you," Salvetti said.

TV presenter and former Leo Burnett CEO Todd Sampson described the creative as "a lawyer ad" and is what happens when lawyers get involved in a crisis with creative that produced in-house.

"This ad, in classic lawyer fashion, is meant to apologise without any detail of guilt because anything that they communicate to the market now will be held up in court in some way, shape or form... what this ad is for is to say (to US Congress) 'don't regulate us'. Sometimes talking about action in an ad can be misconstrued as actual action," Sampson said.

British comedian John Oliver, host of Last Week Tonight, recreated his own version of the ad with a slightly different spin.

GetUp! co-founder Jeremy Heimans, who recently launched movement marketing agency Purpose in Australia, told AdNews that the problem with Facebook is its rhetoric of 'bringing people together' and 'creating a more connected world' doesn't match the reality of being a "participation farm" with a business model that "supercharges extremism and allows for a great deal of manipulation".

Facebook and other tech platforms have recently taken steps to combat fraudulent accounts and hundreds of fake news sources from Russia and Iran, a sign tech companies are starting to tackle these issues proactively.

Aldi, Bunnings and Qantas have featured among the top five most trusted brands since the survey began in October 2017.

The ABC has risen four spots in the face of attacks by right-wing politicians and News Corp media.

The banks have seen trust levels plummet to new depths in the face of a Royal Commission despite spending more on media this year.

“The banks were already deeply distrusted so any material impact on their market value is up and down. But AMP has never before been so distrusted,” Levine said.

“AMP’s skyrocketing level of distrust has cost the household brand billions of dollars. According to financial analysts, more than $4 billion has been wiped off the company’s value as a direct consequence of revelations during the Royal Commission.”