DDB’s Ben Welsh: 'One of my first creative directors lost his job for head butting the client' 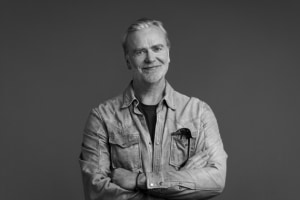 Ben Welsh moved to Australia to become a winemaker but ended up in advertising and 30 years later he is still there.

Currently the chief creative officer (CCO) of DDB Australia, Welsh began his career as a junior copywriter at McCann before moving to DDB Melbourne and then M&C Saatchi for 19 years before landing back at DDB.

“I think what I liked about advertising was my girlfriend at the time was working at Clem's and I used to pick her up from work. People were really cool, entertaining,” Welsh says.

“Some of the funniest, most stimulating and intelligent people I've ever met work in agencies, so you've got a really cool environment.”

Many of them had Porsches, too.

However, it was the “buzz” Welsh got knowing someone would invest in his idea and his work could be seen across the nation that had him hooked.

“I think my proudest moment is probably talking to a mate who was a banker about an ad that he'd seen and loved. I said, ‘Yeah, I did that’,” he says.

Not quite from the Mad Men era, Welsh joined the industry in the late '80s but there was still plenty of behaviour that wouldn’t fly today.

“It was far less collaborative, combative almost. One of my first creative directors lost his job for head butting the client. You wouldn't do that now.”

While he admits he could be “obnoxious” and “opinionated” after just 12 months in the industry, he noted that behaviour was a symptom of the times.

“I feel that creative has lost that respect, maybe because of the way it behaved, but there's been this democratisation of ideas,” Welsh says.

“I think technology has enabled people's voices to become - like through social media - everyone has worked out that they have a valid opinion and a way to get it out.”

Technology has been a blessing and a curse for adland, particularly in recent years.

Disrupting the way the industry works, Welsh says the digital age has led to an obsession with change and keeping up with all the “new toys” rather than focusing on creating great work that connects with people.

“The industry has chased after technology and forgotten a bit why, and so I think the opportunity that tech gives us is new ways to have old conversations really and to do things differently,” he says.

“If our job is solving problems, technology is a tool that we can use but it's not necessarily the end game.”

He references McDonalds’ ‘TrackMyMaccas’ app created by DDB which follows the restaurant’s food chain supply and uses augmented reality to display the results in an attempt to dispel some of the myths around its processing procedures.

“That was a great way of utilising tech to do something that could have been a magazine campaign ages ago, but tech made it more real and it gave you the whole journey,” he says.

“It could have been quite a nice print campaign, but it was a far more believable, tangible thing when you actually could go on the journey.”

For the most though, Welsh says digital marketing and technology aren’t be used intelligently.

He calls out programmatic and EDMs for being the worst offenders contributing to an overcrowded market that just isn’t cutting through to consumers.

“I don't know why I keep being sold something by Qantas that I don't want. I never click on it,” he says.

“Health insurance, I bin it every time, but every month I'll get something from them and it's just irritating and stupid. So, there's no intelligence going into that.”

As advertisers continue to spend more on digital, it is becoming harder to create stand-out ads that will engage with consumers.

Welsh believes many of the conversations once had in the now dying print advertising world still haven’t been translated in other formats.

“We're still needing to have the conversations that print allowed us to do but we either have to do them through digital as a banner or some takeover which doesn't really do, or we're doing it in metrolights and street furniture, which again it doesn't really work,” he says.

“If I could do one thing, it would be to bring back newspapers. We as an industry should actually be trying to drive creativity through newsprint and not just retail.”

Technology has also compressed time which has led to expectations for work to be complete almost immediately.

“The first ad I did would have been edited on a flatbed. If anyone wanted to change that, it would take a while to change it,” he says.

“Now, you can be in and out of the studio. You'll email someone a file and they'll look at it on a little computer screen, possibly a phone, instead of on a proper sized screen.”

The rise in technology isn’t going anywhere but Welsh isn’t banking on programmatic continuing on the same trajectory it has been.

“People will work out that it doesn't work. I think we are seeing a return to actually what works and that is brands,” he says.

“What might happen is that people will actually recognise that their service and their product are the most important things and that they can't fix things through advertising.”

Technology may have pushed its way into adland, changing how the industry creates but Welsh believes it could become useful in other ways.

“One thing that surprises me is how technology has failed utterly to change the way we work fundamentally because we're still coming into work in offices,” he says.

Aside from the external benefits to working remotely such as less cars on the roads and reduced overheads, Welsh says working beyond the parameters of Sydney and Melbourne could open up a world of opportunities and untapped potential for the industry.

“I still think we are utterly uncreative when it comes to the ways we work. You never know when you’re going to have ideas and you need experiences for that, and we might actually be better if we all lived in Byron.”

The shift in the way adland is working isn’t all doom and gloom though.

In some ways it has led new and engaging formats that weren’t previously considered.

“The most exciting thing is the idea of what an ad can be now has changed,” he says.

“So, whilst one can lament print ads, knowing that an ad can be anything - even a popup graveyard - is incredibly exciting.”