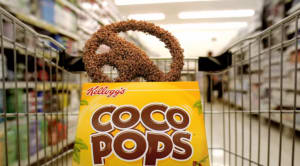 Kellogg is tightening its media placement processes after being found in breach of responsible advertising guidelines around marketing to children.

It has also been forced to make changes to a Coco Pops ad after the Advertising Standards Bureau (ASB) ruled the ad breached the Responsible-Children's-Marketing-Initiative (RCMI) code.

Kellogg, whose agency is GroupM's Mindshare, said the ad had been “accidentally” placed four times in a programme with 'child themes', which equated to less than 1% of total media buy for the ad.

Ads appearing in the wrong place at the wrong time is increasingly part and parcel of the automated advertising landscape, which ultimately a brand's media agency and the TV networks are responsible for.

Kellogg director of corporate communications and public affairs Rebecca Boustead says a lot of work goes into creating and planning Coco Pops ads and a breach of codes is “very rare”.

“We’re disappointed that it was the result of placement errors, but we are pleased to have the confirmation from the ASB that in fact the content of the TVC itself was primarily targeted to adults,” Boustead says.

“In addition to updating the ad, we’ve taken action to ensure that our processes with media partners and the networks are tightened to minimise the risk of this happening again in the future,” she added.

Kellogg will air a revised version of the TV ad in the future.

Recently Unilever was forced to remove an ad for one of its Paddle Pops was found to promote “unhealthy” foods to children.