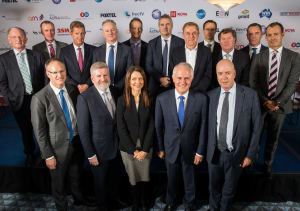 UPDATE:  AdNews in Canberra - the CEOs didn't hold back.

In a show of unprecedented cross-media collaboration, CEOs from all major Australian media owners embarked upon Canberra yesterday as part of a combined effort to lobby MPs to support the proposed media reforms package put to the house by Communications Minister Mitch Fifield.

The headstrong rivals from the likes of Seven, Nine, Ten, SCA, Nova Entertainment, Fairfax, News Corp and more, were out in force, putting their rivalries aside for the bigger picture saying "change is crucial to bring media regulation into the digital age and preserve the future viability of the sector".

In a joint statement, publishers, TV broadcasters - FTA and pay TV, radio networks, publishers trade bodies and more, back the proposed changes and urge members of parliament to pass the bill.

The effort is described as an “unprecedented show of support”. Over the past several years while media reform has been mooted, it has met opposition.

However, most major parties have now come together recognising that change has to happen modernise Australia’s “outdated” media laws, and without broad support it won’t get across the line.

UPDATE: Media reform: A package of compromise for the greater good

The full joint statement reads:
“Change is crucial to bring media regulation into the digital age and preserve the future viability of the sector, which supports more than 30,000 jobs.

Australian media operators must be allowed to compete more effectively against multinational internet giants that are taking hundreds of millions of advertising dollars out of Australia.

All Australians benefit from having a competitive and independent media sector that is able to deliver checks and balances in a healthy democracy. Australian media needs to be empowered to continue to reflect Australian values and tell Australian stories.

This package is key to the entire industry’s ability to keep creating great content that is read, watched and listened to by millions of Australians every day.

Media CEOs call on Parliament to preserve Australian content, voices and jobs by supporting the passage of the broadcast and media reform package in its entirety.”

This statement is endorsed by 28 media companies - but notably many of the major outdoor firms are absent. Ooh! Media and Here, There and Everywhere (formerly APN) are not on the list but say their interests from a radio perspective are represented through Commerical Radio Australia, neither is the OMA. Here’s the full list: