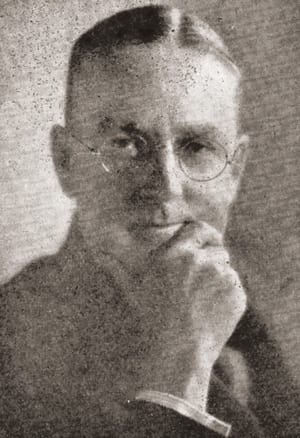 The George Patterson name has been axed after nearly 80 years of operating in the Australian market and marks another of Australia's local brands falling by the wayside. Instead the group will now go by the global Y&R Group name. Read the full story here.

This article is from the AdNews Advertising Hall of Fame archive. George Patterson was in the first batch of retrospective inductees when it launched in 2009, alongside Hugh Paton and Norman Catts.

George Patterson was a shrewd and visionary businessman who established Australia's most dominant advertising agency of the 20th century.

George Patterson the agency was the largest in the country for more than 50 years, with Patterson himself as chairman for the first 30. Born into the entertainment industry – his father was a comedian and his mother an actress - he accumulated useful experience on the client side before travelling to London and New York to see how agencies worked there.

In 1917 he moved from Melbourne to Sydney and set up his own agency with two small clients. A successful partnership with Norman Catts saw the Catts-Patterson agency rise rapidly to the top through the 1920s and early '30s.

The partnership split up in 1934 when Patterson left to start on his own agency. One reason his agency was so successful was his remarkable ability to get close to big business at the highest level. He was a director of Gillette and a director of Colgate-Palmolive.

Unsurprisingly both accounts followed him from Catts-Patterson.

Other directorships included Peek Frean and Hartford Fire Insurance, both large advertisers in their day.

During the war it created highly successful radio campaigns for government bonds, as well as morale-boosting radio programmes for the troops.

On the charity side, Patterson put the agency's resources at the disposal of the Red Cross and directed their publicity functions from 1940 onwards. Agency staff who returned to the agency after wartime duties were presented with a bank passbook – unknown to them he had organised a pound a week into each account while they were serving their country.

Also in the Advertising Hall of Fame: