Are we making advertising interesting enough? 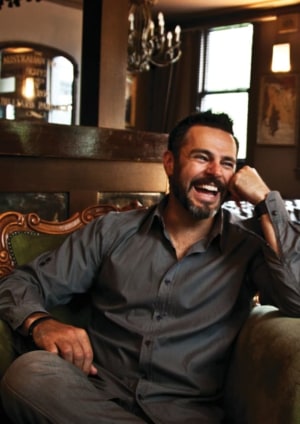 We talk a lot of rubbish in advertising, don’t we. It’s almost become a defining characteristic of the industry.

We make it a sport to identify the latest trend with some clever buzzword (or, let’s face it, rename an old one), and then race each other to use said cryptic phrase in the next meeting where we bullshit battle ourselves in a war over… what?

Don’t get me wrong – trends and new technologies are important. Few industries move faster than advertising, and if you don’t keep up with the pack then you’re roadkill.

In this ‘heads down, thumbs out’ world, if it’s not interesting, it doesn’t exist. We are too swamped with information overload to notice something as superficial as advertising – not surprising when you realise we create as much data every day now as we did between the dawn of civilization and 2003.

Take, for example, your average digital take over. You know the drill: you open a page on your browser or phone and something pops up covering part, or all, of what you want to see. Now firstly, ask yourself when you last responded to, or even read, one of these? Secondly, if you’re like me, does your mind switch instantly into sniper mode, searching as quickly as possible for that little X or CLOSE button?

And if I find that little X before you somehow interest me… then you didn’t exist at all as far as my memory, influence or behaviour is concerned.

The trap we fall into is believing that somewhere between the two extremes of interesting and nothing there’s loads of other stuff we can be – that somewhere in the middle we’ll still be half as successful, right?

Unfortunately, these days, the comfy middle-ground is invisible. It’s not half as good or even nearly as good. It’s nothing. Once you leave the realms of interesting, you fall off a cliff and no one cares.

But in good news, if you are interesting, then you can stop all the thumbs of the modern world, because interesting is a little bit magic – people care about it. I don’t have to convince you of that. You know it’s true.

What’s a little harder to explain is how to be interesting.

Hurricane Irma and global warming are interesting because forces of nature always are. Human beings can be accidently interesting by falling off stuff, by being spectacularly dumb, or by trying to retrieve a recalcitrant poo from a bathroom window during a Tinder date (I’m not making this up – Google it).

But if we focus on what makes human beings purposefully interesting (and by extension, the art, stories and brands they create), then I think the key ingredient is vulnerability.

Vulnerability is a by-product of all the things that make for an interesting story – originality, bravery and risk – and the more vulnerable you make yourself, the more interesting you become. So, if you decide to wear bright yellow shoes into work for a bit of a change… interesting. If you say you’re the greatest heavyweight fighter of all time before you step into the ring against the current champion of the world… really vulnerable and really interesting.

It’s the same with brands.

In a world that loves conformity, if you do something that opens yourself up to criticism (professional, financial or personal) then you’ll have an interested audience. They will care, because they know you must care to have opened yourself up like that.

And therein lies the uncomfortable truth: if you don’t feel like your actions are making you a bit vulnerable, then you’re probably not being a bit interesting.

This is not easy. Everyone likes to feel safe, and it’s this fear of discomfort that leads us down the tempting path of using clever technology and data in place of trying to be genuinely interesting.

We want clever tricks to make people care, without realising they are literally drowning in clever these days. Clever is everywhere.

And when it’s easy to imagine a clever time (coming soon to a boardroom near you) when we will literally be able to put a single, tailored message in front of a single consumer who we know wants whatever product we’ve got to sell… well, clever will be enough, right?

Problem with that is, by the time you can do it, everyone will have the same clever technology available to them. If you can put your product in front of a hard target – so can all your clever competitors, and we’re right back to trying to stand out in a massive sea of invisible cleverness.

So, while so much has changed, and will continue to change, in the world of marketing and communications, in my opinion, the most important consideration doesn’t come down to lots of choices, only one:

Will you be interesting, or nothing?