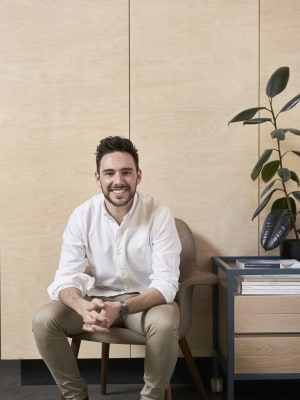 Previously we met Blue 449 analytics director Ben Petremont. Today we meet the vice president of global strategy at Unlockd, Josh Howard. The Aussie exec is now based in New York.

I was Unlockd’s first employee to join our Co-Founder/CEO Matt Berriman almost three years ago in Australia and it’s been a wild ride ever since, especially since moving to New York eighteen months ago to help aid our global expansion.

I was working in Executive Management as an assistant and advisor at Free-To-Air TV broadcaster Network Ten in Australia. It was a role I loved, with lots of learnings about how the real world worked and it ultimately led to a chance meeting with my current CEO - The rest, as they say, is history. Prior to that I had roles at Fremantle Media, Endemol Shine and Channel Seven. I also worked in Radio and was originally qualified as a Lawyer, but never practised because I was having far too much fun guarding truckloads of animal fat on the set of The Biggest Loser (not kidding).

I thought it would be fun, creative, non-linear and full of passionate, dynamic, interesting people.

I probably didn’t fully appreciate the nuances, interconnectedness and commercial drivers of the media industry’s key players, organisations and institutions. It’s a complex ecosystem, driven by varying agendas and many moving parts. Understanding how to manoeuvre through this environment has been a steep learning curve, and one I am still mastering, but I believe needs to be done if you want to be successful.

Unlockd creates value from the time people spend on their smartphones by enabling them to convert their attention into rewards. In exchange for viewing full screen mobile ads, news content or offers upon unlocking their device, users amass points to redeem items like mobile credit, free data, premium entertainment content or loyalty points.

Unlockd’s technology manifests as a white label B2B app that is provided to companies like streaming services, loyalty programs, telcos and gaming companies to build stronger relationships with their customers.

We have expanded to five markets (US, UK, Australia, India and Indonesia) and some of our major partners/clients have included Facebook, Twitter, Yahoo!, Sprint, Vice, News Corp, flybuys, MTV, British Airways, Uber, Lyft, Walgreens, Macy’s, Starbucks and Hulu. We have offices in Melbourne, New York, London, Singapore and Delhi.

As VP of Global Strategy, I’m involved in various aspects of our business including prioritising markets for entry, pitching for new business, launching and building teams in new markets, securing global content partnerships, leading strategic initiatives across the business and being the unofficial hand model in our product demo videos – A responsibility I take very seriously. I recently spent eight weeks in Delhi and Mumbai leading our Indian RandD launch – It was a very cool experience.

Opportunities like Unlockd are rare and I feel lucky to be part of a global business that has an audacious goal to change the way people use and pay with their digital devices. Our mission is to give $500m in value to users globally by 2025. With over $10m given back in the first eighteen months since launch, we are already on our way.

The opportunity to work on the cutting edge of how people use, pay for and optimise their digital devices, which have become our windows to the world. I realised early on that working in media, communications and technology gave me a front row seat to impact how people live. Whether it’s digital, TV, radio or any other medium, these are powerful platforms and we’re privileged to be able to shape how people use, consume and access them more liberally. If we exercise this privilege with responsibility, the positive impacts can be awesome!

The list is endless! My key realisations have been that emotional intelligence is everything, good leadership is paramount, you need to be able to execute well, everybody just wants to be recognised, common sense is underrated, be nice/easy to work with, do what you say you’re going to do, curiosity can’t be taught, we should all play to our strengths and it’s ok to admit when you don’t know the answers (I often don’t).

As a lapsed lawyer, our legal department would probably be the most logical choice. But in reality, I’d love to swap places for a day with our London-based Global Chief Creative Officer JC Oliver. He’s the former Global Chief Creative Officer of AOL and Global Head of Innovation at Microsoft, and now spends his time evangelising our business at conferences and industry events around the world – Not a bad gig.

Massive worldwide smartphone growth provides really exciting new ways for us to tap into ‘Mobile First’ emerging markets across Asia Pac, Africa, The Middle East and Latin America. With over eight billion smartphone unlocks a day globally, people are spending so much time on their devices. We have the opportunity to reward them for that time with our attention-based virtual currency.

Our CEO/Co-Founder Matt Berriman – His ability to create, run, finance and exit businesses is a sight to behold.

Haha dethroning isn’t really my style, but on the mentor side I owe a lot to my old boss Russel Howcroft, who is still a close mate. Having worn many hats (including as Chief Creative Officer of PWC, Exec GM of Network Ten, CEO of Young and Rubicam, and a panellist on ABC’s ‘The Gruen Transfer’, among others), he’s taught me that happiness sells and you can never be too creative. Working with Russ every day was like going to an ideas factory where you were encouraged to think outside the box, then refine how something could be commercialised. An idea without a buyer is nothing, but a buyer without an idea is even worse. I’ve taken these learnings and apply them to my work and life every day.

The mentors and people I admire and look up to have had really non-linear careers, so I see myself going down that same path as well. In the future I see myself probably be in New York running my own business of some sort where I can combine my loves of people/talent and creative, strategic and commercial thinking.

That Mobile Advertising is the biggest opportunity most brands still haven’t capitalised on.

Walking the streets of New York is a pretty good place to start – The city is absolutely teeming with colourful characters who just wouldn’t feel at home anywhere else, and I can’t get enough of it.

I do photography and art which I give away to friends.

The ad of my childhood, which still gets regularly quoted to this day.

The Media industry looked way more fun than the Law…And it is!

I’d be a foreign correspondent so I could put my International Relations studies to good use, or I’d be figuring out a way to turn my passion for connecting people into a fully-fledged business.