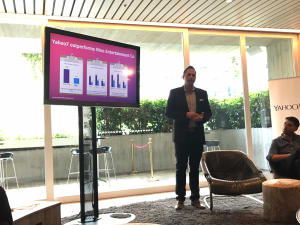 Yahoo7 has flagged plans to solidify its position as the third player behind Facebook and Google, powered by the synergy of its data, content and technology offering.

Speaking at a media briefing, commercial director Paul Sigaloff said the company's position in these three pillars are the "holy grail" for Yahoo7. He also announced the launch of six new video ad formats that will roll out this year.

While Sigaloff is positive in the company’s direction for this year, Yahoo7’s sales and partnership director of data and ad platforms Ben Green said the brand has to build back some of its reputation in this market.

“Yahoo7 in Australia has an image problem. When people think of Yahoo7 they think of the digital portal of Seven West Media’s media assets, where as in other markets Yahoo7 is seen more as a technology company rather than a media company,” Green said.

Seven West Media took back its digital assets from Yahoo7 last year. Speculation has been mounting what will happen to the joint-venture between Seven and Yahoo7 once the Verizon acquisition is finalised. Sigaloff, who referred to Verizon as Yahoo's "rich sugar daddy" said news about the joint-venture will be made in two months.

Sigaloff also plans to work on Yahoo7’s perception as only a publisher, as it now receives more than half its revenue globally from its ad tech offerings, BrightRoll and Gemini.

He credits the BrightRoll acquisition in 2014 as “one of the most successful” ventures for Yahoo7, seeing double digit growth each year.

Taking aim at one of its rivals, Sigaloff said Yahoo7 “outperforms” Nine Entertainment Co and is the third biggest publisher behind Facebook and Google.

“There’s a couple of interesting dynamics in the digital market around new ad dollars and a couple of big hoovers in Facebook and Google sucking out as much as 85 cents in every new ad dollar. We believe there is an opportunity to disrupt that,” Sigaloff said.

However, Nine chief digital and marketing officer Alex Parsons has found fault in the numbers and criticised Yahoo7 for “deliberately” misleading the market as they exclude the Nine/Microsoft network.

“Those numbers also clearly showed Seven and Yahoo with a unique audience of 10.1m. Any comparison of the reach of their digital network with ours should include an apples for apples comparison and not seek to deliberately mislead the market by excluding our longstanding partner Microsoft.”

Yahoo7 says it stands by the audience numbers which reflect only owned and operated assets.

"Yahoo7 does not include audiences from its extensive third party ad network, we have reported the numbers just as they appear in Nielsen under parent entities. We believe this to be the most transparent and valuable comparison of audience reach. For clarity, the data under discussion is for Yahoo7 alone and does not include the substantial incremental audience generated by SWM's other owned assets," a spokesperson from Yahoo7 says.

The announcement from Yahoo7 comes as the Yahoo deal with Verizon approaches completion, after being delayed recently.

In October AdNews reported Yahoo7 would cut 20 sales staff from its team in response to “changing market conditions”. The redundancies were thought to be 10% of the Australian team.