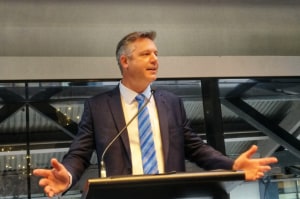 Speaking at a stakeholder presentation ahead of next Tuesday’s annual results, the former Ten and Supercars boss unveiled his vision for how APN Outdoor would evolve over the next year after a disruptive 2017 in which the merger of APN Outdoor with rival Ooh!Media failed to happen due to the ACCC and long-serving boss Richard Herring left the business.

Chief among Warburton’s priorities is transforming APN Outdoor from an asset-led business to an audience-led one, which will be fulfilled through “innovation” and new data and programmatic partnerships.

Among these is work with Seedooh to help drive more consistent measurement and credible reporting across the industry.

“When we think of the digitisation, which is maturing, the industry should be congratulated,” Warburton said.

“The quality with which the industry and all operators have rolled out the inventory is quite extraordinary – 47% of revenue (for digital faces) in a short period of time.

“Everyone has ridden the wave – 50% growth in four years is pretty good.

“We have to transform to being a solutions seller and creative seller and do a better job of it.”

Warburton said that as the digitisation of billboards has rolled out so rapidly, industry measurement and APN Outdoor’s approach to market have failed to keep pace.

The lack of consistency in how outdoor advertising is measured and reported has been a frustration to media buyers and advertisers, who tell AdNews they expect to see improvements this year.

“We’ve been through a huge roll out of inventory, we did 38 screens last year and we’ve got plans for another 25 this year. We are now more targeted in the future roll out, based on location and quality,” Warburton added.

“My comments on the model are that industry association measurement is not there and our go to market approach is not quite right across the board…there’s a lot of talk about share of voice but it’s not quite right, creatively we are not selling the proposition as we should be.”

An example of this, Warburton explained, is APN Outdoor’s pricing model around making changes to creative. Previously APN Outdoor charged advertisers for any creative changes, but has now shifted this model to allow unlimited changes.

“Audience-wise it’s an industry problem. Has the OMA been a bit slow to deal with it? Absolutely,” he added.

Warburton said he was confident the industry would align on metrics.

It’s an important step in third-party verification to try and provide rigour and transparency to outdoor industry reporting, and is being supported by major media owners like APN Outdoor and Ooh!Media, as well verification firm Integral Ad Science.

Although he couldn’t share details ahead of next Tuesday’s investor call, Warburton hinted that FY17 results have been impacted by failed merger talks with Ooh!Media as well as the exit of long-service leader Richard Herring.

“2017 was a very difficult year for the company. The fact is if the Ooh!Media merger had gone through the company wouldn’t exist,” he said.

“When you go the other way and the merger ultimately fails and you have the transition of the long-term CEO of a company, it has the effect of stalling where you are both internally and more broadly in the marketplace.”

Warburton accepts the protracted negotiations “put us a little bit behind the eight ball”, and there was a “softening” of some of APN Outdoor’s results and putting its products out to market.

Chief among these is rolling out innovations in the use of data and technology to help the company move from an assets-based company to one that helps advertisers better target audiences.

APN Outdoor plans to do this through partnerships with data and tech vendors, including Pureprofile, Rubicon Project and Data Republic.

Warburton also stressed the importance of retaining and expanding contracts, including the extension of its contract with Sydney Trains to provide more screens on platforms as well as roadside and premium backlit billboards across the network.

In the past year APN Outdoor has retained rail network contracts in Melbourne and Adelaide as well as Sydney Buses and the Tullamarine Freeway in Melbourne. It has also recently lost Yarra Trams and Canberra Airport contracts.

It’s been a busy first 20 days into Warburton’s new role, but the hard work has only just begun.