The digital detox, Qantas gets emotional and the new data face of PR 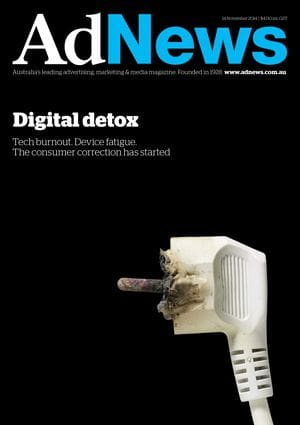 Tech burnout, device fatigue. People are tipping the other way and trying to shake the tech obsession. Paul McIntyre looks at the digital detox phenomena washing over Australians, in the latest issue of AdNews in print. It's out today. Subscribe here or get it on iPad.

“It was great for us all to realise you could enjoy a meal without Instgramming it.” Arianna Huffington.

Qantas' new brand campaign is a big, bold move. In The Newsmaker, we talked to Olivia Wirth about why the much-maligned airline needs to remind Australians why they love the national carrier.

“Whatever story is going on from a corporate perspective, the health of the brand underlying all that is really robust and strong.” Olivia Wirth, Qantas.

Read it right now on the iPad edition.

“You can crack and last a season, but to have longevity is different. We have absolute faith in the brand. We have better penetration for the new product than we've had for anything else over the last 10 years.” Emma Jane Collins, Peters Ice Cream.

PR is not just about the long lunch any more. It's getting to be a strategic part of brand communication. Ogilvy's Pulse Communications is making a name for itself by combining good old fashioned conversation skills with data analytics to prove PR's worth. Pulse boss Richard Brett talks maths and data – not the typical PR stomping ground - in The Sell.

“PR's weakness has been not having people in the building that know how to use data.” Richard Brett, Pulse.

In the news, we look at some exclusive data on exactly who is watching what on IPTV, Mia Freedman's cross platform push for Mamamia, D&AD's moves into multiculturalism, and Mindshare's view that native will counter Google's high share in the advertising world.

Check out the finalists and the winner of the latest Val Morgan ACES awards for cinema advertising and the winners of The Glossy Awards.

After a creative agency won the Grand Prix at the Media Federation Awards last month, in Creative Focus we ask five top creatives how they see the blurring of the lines between media, digital and creative agencies. Whybin\TBWA's Wesley Hawes, DDB Sydney’s Simon Veksner, DDB Melbourne’s Glen Dickson, Jason Deacon from DT/Ogilvy Australia and Reed Collins, Ogilvy Hong Kong, tell it like it is.

“Most of the non-agencies are making counterfeit ads. It's like making a car without an engine.” Simon Veksner, DDB Sydney.

Plus there's s 32-page pull out of the Australian Magazine Awards 2014.Jackie Frank was inducted into the Magazine Hall of Fame, and Real Living was named magazine of the year.

Bram Williams, of Archibald Williams, takes a lesson in hospitality from a recent trip to Japan. Brands should do the same.

Fresh from being bought up by Publicis, SapientNitro Australia boss Marcos Kurowski talks about the importance of back-end systems.

In the back of the book, Lee Stephens, from Switch Digital takes on My Big Break, Ikon Sydney general manager Alan Weetch takes our 60-second interview and M&C Saatchi's Andy Flemming has a pop at Paddington.