Independent advertising agency Banjo has publicly apologised after what has been alleged as a 'racist' incident involving a senior member of staff and an interview candidate.

The Sydney-based shop, which has clients on the book such as Best & Less, Pacific Brands and Crown, says in the course of expanding the account management team at Banjo, an “unfortunate misunderstanding” occurred during an interview with a candidate, “for which Banjo would like to offer an unreserved apology”. The agency is getting on the front foot with an immediate response to address a flurry of comments on social channels. Agencies are often criticised for not moving quickly enough to address contentious issues.

It's thought that freelance account director Surungi Emily Hohol had an interview at the agency and the senior staff member who conducted “what was a very positive interview, made a casual remark at the end of the interview, which was intended to set the person at ease”.

In a Facebook post that has since been shared on Twitter, Hohol, who has worked at the likes of Havas, BWM and DDB Sydney, said: “The injustice of racism – I'm livid and seriously irritated by this. Yesterday I had an interview at a creative ad agency in Sydney and was told that due to being brown skinned (though I'm Sri Lankan) and have lived in Australia for 27 years, I wouldn't be suitable for the role as they already had two other Indian people.

“Direct quote 'the client might be alarmed by having three brown skin [sic] people attend a meeting', seriously, what is wrong with people,” the post read.

In a statement from Banjo, which did not clarify what the remarks were, it said that comments had been taken out of context and has since gained some notoriety on social media.

“Needless to say, the Banjo staff member is deeply upset by the incident, which occurred yesterday,” the statement said.

“There has been a lot of media attention on the issue of equality – including race, gender and sexual orientation, and age – in recent times and we acknowledge that emotions can run high.” 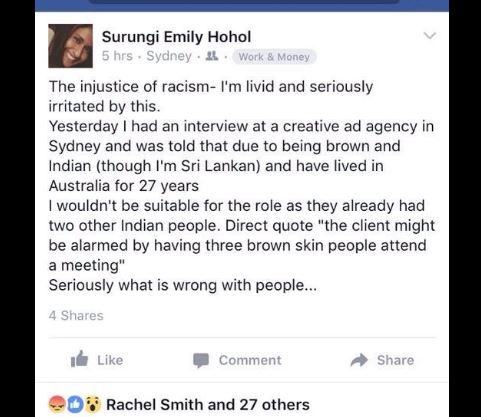 Banjo managing director Andrew Varasdi said the feedback he received was that the interview was a very positive one, reflected in an email sent immediately to the recruitment company that was complimentary of the candidate, and addressed the possibility to explore further opportunities with Banjo.

“Our position on this remains unchanged. When I learned of the situation I immediately contacted both the candidate and our staff member to offer my empathy and support. I have arranged to meet with the candidate first thing in the morning 5 August) to reassure her of our policies on recruitment.”

He added that in Banjo’s seven-year history, the agency’s recruitment policy has always encompassed not only hiring the best possible talent, but also ensuring that the staff spans all ages, genders and ethnicities.

“We couldn’t possibly deliver on our promise that our clients come first, if our own staff did not reflect the Australian community. We are always prepared to offer our clients the best advice to connect with their customers,” Varasdi said.

Banjo’s said its current staff includes 50% women in senior management and 50% women overall, and half of the staff are from ethnic backgrounds including India, Asia, UK and South America.

“We are extremely proud of the make up of our talented staff, which is reflective of the diversity of Australia. We hope that we will be judged on our record, and that all candidates who consider joining us at Banjo will do so too,” Varasdi said.

Diversity is a hot topic across adland, with just this week Kevin Roberts, the Saatchi & Saatchi chairman and head coach, resigning just days after being embroiled in a row over sexist comments.

Also this week 10 Aussie agencies brought together by AdNews banded together to form ‘The Agency Circle’, a group and charter designed to turn the gender and broader diversity debate into action and change.

It's an initiative led by Australian agencies who want to see real change happening in the Australian industry; Clemenger BBDO, Leo Burnett, The Monkeys, M&C Saatchi, Havas Worldwide, Whybin\TBWA, The Hallway, JWT, Ogilvy and VCCP. Together they’ve drafted a charter for diversity to which members will subscribe.