Sharb Farjami on reset and relaunch of Storyful 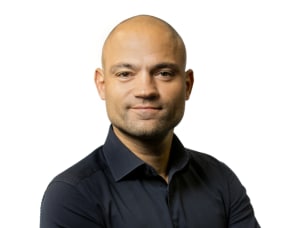 On a quest to break past misconceptions about the company, Storyful's new game plan sees it refocus, rehire and and up the ante around disinformation.

Under Sharb Farjami’s leadership, Storyful is pivoting from its core focus of content aggregation to become an "intelligence agency" that fights fake news in newsrooms and manages the corporate reputation of brands.

Along with a reset of the global management team, Farjami admitted that after conducting a business review he identified a few “burning platforms” he had to extinguish, as well as core competencies that needed tweaking, that led to the relaunch of Storyful in September 2018.

“Storyful has never made a huge amount of noise and people probably had misconceptions or misunderstandings of us,” Farjami, who previously worked at Foxtel, told AdNews.

“The relaunch coincides with what’s going on in the world too. We live in an age where there’s never been more digital chaos or disinformation; be it corporate, be it brand, be it news or political.”

The fake news narrative throughout 2018 has created a perfect swell for Storyful and is something the company aims to leverage more with the hire of former Australian editor Darren Davidson.

Davidson, who relocated to New York, is tasked with relaunching the newsroom offering of Storyful with the aim of protecting journalists from both accidental and intentional misinformation.

The company has hired David Higgins in Australia to lead the editorial team. The role sees him return the News Corp, where he previously edited news.com.au and reported for The Australian.

Taking its learnings from US politics, in which Storyful identified a fake video being circulated of a male reporter getting physical with an intern at the White House, the business will staff up its News Intelligence Team in Australia to cover election cycles.

“It’s so easy to impact people’s reputations or make a whole portion of a population believe something that isn’t true if you can do it in a coordinated manner.

“The other thing about disinformation in a world of fairly partisan politics around the world is one of the nuances of social media; we end up in an echo chamber where we hear what we want to hear. IF you see disinformation, even if there is a correction, due to the bias in your news feed, you’re unlikely to see that.”

Expanding its remit, Storyful is also looking to use its tools to better help brands handle and avoid social media backlashes.

An example of this has been Storyful’s work with pharmaceutical companies to help them understand the nature of anti-vaccine misinformation campaigns so that they might be better able to combat them.

“In the pharmaceutical and bank sectors, there are huge coordinated campaigns with disinformation,” Farjami said.

“The movement of anti-vaxxers in fringe networks and social media against pharmaceutical companies who are creating vaccinations is huge. That’s an outright health risk if people are putting false messaging out there.”
It has also worked with airlines, retailers and consumer goods companies to monitor sentiment towards their brand.

“There’s a big movement towards brands to be aligned to corporate social responsibility messaging or to take stand on an issue. One of the bi-products of this movement is that you often get caught up in a political point of view,” Farjami said.

Farjami references the impact Nike’s Colin Kaepernick ad had on New Balance as an example. The ad promoted white nationalists to take a stance against Nike in favour of New Balance. They quickly became caught up in a scandal after they were referenced as being the shoe of the Ku Klux Klan.

It’s these types of social media sagas that Storyful can monitor to understand how their brand is being discussed on various platforms, such as Facebook and Twitter.

“There’s a huge opportunity to help and enhance newsrooms by protecting them from disinformation. Then there’s the opportunity to present corporate and brands more insights they wouldn’t traditionally get because they haven’t tapped into these minds and data,” Farjami said.

It was reported this week that Storyful closed its Hong Kong office and laid off six staff in cost-cutting measures with Sydney thought to be leading the APAC region.

The closure comes as Storyful realigns its newsroom footprint and refocuses its resources to Australia, Europe and the US.

"This strategic move is part of our long-term editorial vision todeliver the highest quality verified news, social intelligence, andhigh-impact investigative journalism to our partners. We continue to recruit around the world, with further expansion of our teams inAustralia, Europe including Dublin, and the US this year," Storyful said in a statement.