Scott Whybin inducted into the AdNews Hall of Fame 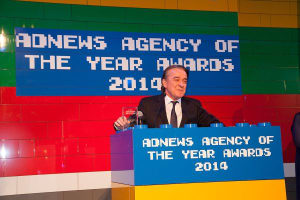 Scott Whybin is this year's inductee into the AdNews Advertising Hall of Fame. With 30 years in advertising and almost every industry gong out there under his belt, Whybin remains one of the quiet achievers in the creative industry. Rarely in the media spotlight, he sat down with Paul McIntyre to talk about the old days and his obsession with strategy.

More than 30 years on and creative boy-wonder Scott Whybin, who joined the world-beating Australian creative outfit The Campaign Palace and won every local and global award and accolade known to advertising man, has kept his creative instincts.

He was the pin-up boy for former prime minister John Howard, for the campaigns he created for the Howard-era Coalition – namely smashing the Coalition’s GST regime through the public acceptance barrier.

But a curious quirk of Whybin’s, outside the standard character nuances of a talented creative mind, is that he reads a balance sheet like a copywriter gobbles beer cracking a brief.

Whybin today is chairman and regional executive creative director of Whybin\TBWA – a powerhouse agency brand in Australasia built from scratch when he struck out on his own in the mid 1990s. Today it is also one of the best-performing units in TBWA’s global network, which includes the celebrated LA office which has handled Apple – and the late brand-obsessed Steve Jobs – for decades.

Whybin has kept about 35% of the Australian and New Zealand operation in local hands. An approach he learnt from his early financial mentors at Clemenger when it took a 30% stake in his startup before, quite sportsman-like, on-selling its stake to an emerging sister agency in the Omnicom group, TBWA, which Clemenger was a part of.

Whybin credits Clemenger co-founder Peter Clemenger and his financial wizard Hylton Mackley for his own financial sharps today. No mention, though, of his privacy-loving billionaire father-in-law, David Hains, the architect behind the Melbourne-based and very low-profile Portland House, one of Australia’s biggest hedge funds. Hains is estimated to be worth $2.3 billion by BRW. Whybin will talk glowingly and at length about his wife, Cathy, and his kids but the rest is a no-go zone.

For a tier-one creative operative, however, Whybin’s financial acumen is rare. In the cut-throat world of advertising, where remuneration contracts with blue chip companies are regularly struck at razor-thin margins, or less, Whybin is one of a handful of agency bosses who refuses to discount. The stories abound of him in sword fights over financial contracts in which he will walk from blue chip business if he doesn’t believe a healthy margin can be made. Just talk to a large telecom-munications company about that one.

“A rainman with figures and whose other skills include incisive abilities as a planner and strategist,” is how multi-award winning creative Nigel Dawson described him when handing Whybin the Melbourne Advertising and Design Club Lifetime Achievement Award in 2012.

“He is also the consummate account wrangler who can seduce and convince the top end of town. There was a period when he was quite a good writer full-time. I’ve sat through award shows in the 80s and 90s watching him tediously wear out carpet, picking up enough bits of metal to keep BHP ticking over for weeks. When the top 10 Australian ads of the past 25 years were judged, five had his name on them.”

Some of Whybin’s high-profile work includes landing a Ford Falcon on an American aircraft carrier for Dunlop tyres, an exquisite piece for the RSL and a host of work for Pacific Brands – including the globally acclaimed “Sic’ em Rex” Antz Pantz campaign, which resulted in runaway sales.

Dawson says Whybin’s showreel is “one of the finest you’ll ever see”.

No question the man is talented. And an enigma. He rarely talks to media these days, in fact he hates it. He’s happy for his management team to dance with the devil, but Whybin is wary.

Many say he was a fast and loose character in previous decades – a descriptor he has no problem with even today if it produces results. But Whybin credits The Campaign Palace’s creative legend, Lionel Hunt, with building a structure and process to harness his creative nous.

“Ninety nine per cent of creativity is how you define the problem,” many will hear Whybin say. And he’ll keep saying it. “If you’re not getting it right, you’re not defining the problem properly. If you distill that problem to such an extent, and keep distilling and distilling, you’ll get it.

“It’s really appropriate now given the number of channels we have got. That’s what Lionel instilled in me: speed and an obsession with strategy and the distillation of that strategy to solve a problem.”

Like most with a creative bent, Whybin has demons, but has learnt to deal with his own insecurities in the professional arena by turning the focus back to the core of his creative craft: distillation of strategy. “I’ve always believed that A-grade people are the ones that know their fallibility and make insecurity their mate,” he says. “A-graders learn to relax in fallibility and trust their instincts. You go back to the strategy, go back to the problem and that gives you confidence.”

So what’s next for this year’s Hall of Fame inductee? Some argue he’s still an old school adman who was untouchable when the world was different – although in the same breath they marvel at Whybin’s stamina.

He laughs. “I’ve embraced the new school, but I believe in the old school fundamentals of selling things that have the same tone of voice in all channels,” he says. “That hasn’t changed. It will never change. But we on the creative side have to embrace media. They’ve got to be bound together again. We should be sitting next to media people. Creativity will never decline because you can build a house with carpenters and plumbers, but unless you know what the house looks like you’ve got nothing.

“Ideas still drive this industry. Ideas drive the channel strategy. For clever clients they do, anyway. How does this idea work in social activation, TV or any number of digital iterations? Ideas should sit right alongside media selection. There is a real question around how we charge for that and when you’ve got so many agencies out there acting like whores, it worries me for future generations to come if we keep going that way.”

Still, Whybin sees himself hanging around for more. He spent most of last month operating out of a health retreat in Byron Bay, an annual pilgrimage which might include the occasional surf, so he stays fresh for the day job. “I don’t want to go anywhere,’” he says. “I love it. The best part of this business is watching the kids you bring in and watching them develop in front of your eyes. I enjoy them feeling the potential they never thought they had.”

Here’s to that and the rest, Mr Whybin.