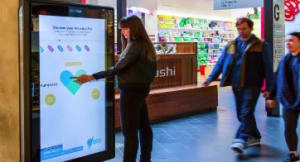 Ooh!Media has reported its results for the first half of this year, with the outdoor company seeing its revenue rise some 18% to $146.6 million. It also saw an increase of 53% year-on-year in profit, to $6 million for the half year up until June.

Its earnings before interest, tax, depreciation and amortisation (EBITDA) also saw an increase, rising 33% to $26.8 million, with the business's gross profit rising 41%.

It also highlighted that for the first half of this year its digital revenue hit $65 million, which now makes up 44% of its total revenue.

Ooh!Media credits it growth to its diversified portfolio, with the business having some 21,000 signs, which include more than 6,000 digital signs and more than 130 large format signs, as well as ownership of several online websites.

The company's results come as it revealed that it's way ahead of its expectations for its digital expansion plans. Ooh outlined yesterday that since the beginning of 2016, it has grown the number of digital large format roadside sites from 26 to 41. Including locations approved for construction, the total is set to rise to 50 by the end of the year. This is ahead of its previous schedule of 50 digital large format roadside conversions by the end of 2018.

In its results, Ooh also pointed to its recent strategic acquisition of youth publisher, Junkee Media. In June, the outdoor media giant acquired an 85% in the publisher, in a deal worth more than $11 million.

“We started this journey with the launch of content platform Q-view and we later added Hijacked.com.au and ShortPress.com.au to deliver advertisers a 360-degree offline and online marketing channel to reach specific audiences," Cook said.

“These content platforms have generated new revenue from advertisers in categories including telco, B2B, travel, tourism and government, who have invested in campaigns that combined out of home advertising with native content running across the social, online and mobile platforms.”