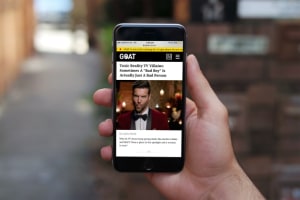 The new, mobile-only site launched this year without a desktop site and is targeted at millennial consumers, offering pop culture, entertainment and general news.

According to Reiken, the Nova Network currently reaches a bigger audience on its Nova digital network than Pedestrian and Junkee, tapping into an audience of 1.54 million millennials every week via its broadcast channels.

For this reason, the company believes it won’t have to rely on channels like Facebook and Instagram as heavily as its other competitors may, rather using social media as an amplification tool.

This shift away from a social media heavy strategy will also shape the content the Goat platform distributes, as it looks to turn its attention towards different digital metrics to measure engagement.

“We are in a really good position in terms of that audience. For us, it is more about extending the conversation that we are having alongside this relationship already,” Reiken says.

“Facebook is just one part of our amplification strategy. There is more conversation now we are having with partners to look at how we further distribute our content.

“It's an exciting time in terms of looking more around quality, looking around engagement, time spent and all those metrics. Moving away from clickbait and amount of clicks and all those things like page views, I think it is a real shift in those digital metrics.

“We are really positioning this product to strive in this space and the shareability space that metric is really important for our success and what we are going to measure our success on.”

The mobile-only positioning has been developed in response to the Australian audience’s dramatic shift to mobile devices, with Deloitte research highlighting smartphone penetration approaching 95% for millennials.

The site is currently live but is yet to activate any of its commercial functions.

Reiken says the company was now in the final stages of securing its partnership deals, with full activation expected over the next fortnight.

He wouldn't reveal the brands Goat will be working with, but says they will span across the categories of technology, FMCG, automotive, finance and more.

The key focus for Goat is amplification and how, alongside its advertisers, Goat can tap into the existing Nova network to make its presence felt, he says.

“Social is going to be an important part of distribution and amplification. We are lucky to already have a relationship, through the format that is radio and the personality-led programming.

“I think that leads really well for us to cross promote in terms of our content. You are going to hear, over the next couple of weeks or so, increasingly more integration across our core assets.

“The conversational nature of radio just plays really well and it is going to allow us to further drive awareness and traffic to our destination.”

Reiken says this shift from traditional methods will also bleed into how commercial partners will advertise, with Goat focused on providing consumers with a 'value exchange' proposition.

He says it's not enough anymore to speak to millennials while relying on “a couple of MRECs and a couple of banners to tell your story”. Instead, it's about bringing native integration into the site.

“You can't just advertise. There has to be some kind of value exchange. That doesn't always have to be something for free, it can be a piece of content, it can be just an interesting story but it really about thinking 'why is then here?' and how is it going to be received by audiences?

“Obviously commercial editorial is a key part of that, so looking at written, video, audio and also visual, so that imagery and also cartoons. And really thinking about those different ways that as a brand platform we can help engage those brand's stories."

Reiken says Goat will "lean away from standard formats" seen on other millennial-focused sites.

“We use Goat as a brand and then execute campaigns utilising resources that we have as Nova Entertainment and traditionally using the platform, as such, in delivering those kind of experience through the pop-up channel or other bespoke formats to really deliver that value exchange, to give back to the audience, rather than just advertising to them with messaging that doesn't engage with them," he adds.

With the site only in its early launch stages, further product and partnerships updates will be provided over the coming weeks.