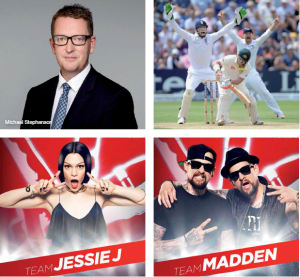 This article first appeared in AdNews in-print. Click here to subscribe to the AdNews Magazine or read the iPad edition here.

Nine's new sales boss Michael Stephenson, who replaces Peter Wiltshire, the network's chief revenue officer who exited the business this week, is so confident in the network's position that he is urging advertisers to over-index their investment in the second quarter as the organisation predicts a huge rebound after one of its worst starts to a ratings season.

Also on the agenda for the second half of this year is selling more integrated television and digital packages to advertisers, which could soon include addressable advertising.

“We will have the capability to do it towards the middle of this year but when we will physically do it is yet to be determined,” he said. “What you need is enough scale [of data] to make it meaningful.” Another area Nine is banking on is digital video, which Stephenson described as “absolutely the hot thing in town”.

The decline is due to a two percentage point drop from Nine’s main channel. The latest SMI figures show too that both Seven and Ten took a bite out of Nine’s share of adspend via media agencies. Stephenson admits Nine's audience share is lower than it was 12 months ago, but remains bullish as he takes on his new remit.

“It's not a surprise because we knew what we had in the first quarter compared to what we had last year,” he said. Nine's “soft” start compared to last year is due to several factors. The 2015 Cricket World Cup and The Block, a “juggernaut” Stephenson said is the “most integratable format in Australia”, make the comparables tough.

This year, Nine's reboot of Australia's Got Talent against Seven's My Kitchen Rules did little to dent Seven's number one show. The start of the NRL season, which has helped Nine achieve its strongest ratings week, is a sign the tide is turning this year while hopes are also pinned on The Voice, although Stephenson was reticent to name any of the sponsors that are already locked in. “That's why we will be so strong in quarter two and that's why we are in the market now encouraging advertisers to over-index with us in that period because of the ratings that we are going to deliver ... that's how positive and confident we are.”

Nine's start to the ratings season has been less than ideal but it would be wrong to dwell too much on a stuttering start. Although Nine's new downto- earth revenue boss Michael Stephenson exudes a calm exterior, the sluggish start will privately grate against his competitive streak.

“I am fiercely competitive,” he said this week, adding he is “ obsessed and focused” on driving Nine's 400-plus sales team to deliver against “strategic objectives”.

Pitching more integrated television and digital packages to advertisers, as well as the move to addressable advertising will also be key to Nine's future fortunes.

The capability, he said, will be there mid-year but there isn't yet the wealth of personal data required to underpin it, data which is being collected from Mi9 data collection. Launching addressable advertising could be a massive win for Nine and help the network make the most of video advertising, which Stephenson rightly described as the hottest thing in town.

Last year, Nine's ratings were buoyed by a much stronger international cricket season, including a home Cricket World Cup. Live sport is always a huge draw and the loss of 10 days of cricket, combined with poor opposition will have had an affect.

So, too, will a shift in programming, running a reboot of Australia's Got Talent against the powerful MKR brand – an experiment that has probably failed.

Last year, it took Nine Network and its main channel Nine until mid-June to take over the top audience share from Seven. Stephenson appeared confident the network will turn it around again in the second quarter.

Nine has a challenge ahead. There's a lot of work to put in to take it from where it currently is – to where it needs to be in the market. With another executive from former CEO David Gyngell’s era now departed, Nine boss Hugh Marks will be banking on another one of his appointments to help steer Nine back into growth.

As he takes hold of the revenue reins after years of industry veteran Peter Wiltshire, it will be important for Stephenson to strike the right balance between continuity and stamping his own mark on the role.

In his favour is that he is well respected in the media market and will have time to settle into his new role.