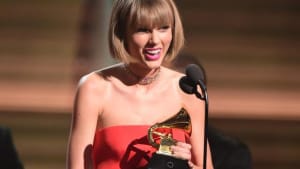 Taylor Swift most mentioned during Grammys

The awards show had a unique audience of 201.9k, with a total of 76.1k tweets and 1.9million impressions. The hashtag #grammys received nearly 30,000 mentions.

The top social moment was Taylor Swift winning album of the year for the second year. The top retweet was from the Beibs.

Alissa Thomas appointed editor of Shop Til You Drop

Bauer Media has announced the appointment of Alissa Thomas as editor for Shop Til You Drop.

Hearst Australia manager Marina Go, says Thomas will be using her vision to refresh the magazine and overhaul the brand's social media strategy.

Here Come the Habibs is slightly down on its launch audience but still had a strong result, with 944,000 people tuning in, according to overnight OzTam figures.

The week prior saw the Network Nine series debut with 1.25 million viewers, making it the second most watched show of the night.

The top watched program of last night was Seven's My Kitchen Rules, which continues its strong run with 1.6 million viewers.

My Kitchen Rules and Here Come the Habibs was the first and second most watched shows by the major demographics, including the 16-39, 18-49 and 25-54 age brackets.

PubMatic has appointed Peter Barry as its new country manager for Australia and New Zealand. He leaves his role as commercial director in Australia for Ad2One.

Barry will be responsible for developing new publisher relationships with a particular focus on growing mobile and video inventory. He will also be responsible for increasing spend with key agency trading desks and Demand Side Platforms.

PubMatic vice president Jason Barnes says he is confident Barry is the right leader to help publishers make the most of the market opportunity for the Asia Pacific region.

The Age editor-in-chief Andrew Holden is set to resign from Fairfax Media newspaper after 13 years at the company, The Australian reports.

Holden’s departure precedes an editorial restructure for the Sydney Morning Herald and The Age, said to allow the publications to better deliver its 24/7 news cycle. It is understood that Darren Goodsir, current editor-in-chief of the Sydney

Morning Herald and the Sun Herald, will oversee the metro publications. Mark Forbes will be acting editor-in-chief at The Age.

The departure follows news the company is to reduce its staff by another 70 jobs as it moves production back to Pagemasters. The Age has seen year-on-year declines, with the last drop in print sale leaving them down 8.7% in the December quarter.

Passengers on Qantas flight 73 departing from Sydney to San Francisco this afternoon will experience the world’s first tech talk in the sky, through a partnership with TEDxSydney.

‘Ideas That Travel’ will see four of Australia’s most prominent technology and science innovators share their vision for the future of technology in design in a series of talks held aboard a 13-hour Qantas flight.

The talks will be live-streamed to passengers through the in-flight entertainment system and available online on arrival.

The Cannes Lions International Festival of Creativity has announced the 2016 just presidents, including Aussie director Emad Tahtouh, from Finch.

Lions Festivals CEO Philip Thomas says the judges are looking for unique work that is creatively exceptional and challenges the norm.

The full line-up of 2016 Cannes Lions jury presidents have been named as follows: