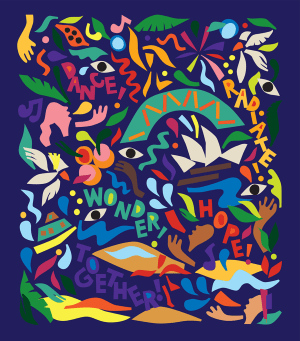 The illustrations represent Sydney’s sense of wonder during the summer months.

The creative for Sydney's iconic New Year's Eve celebration has been revealed and will run throughout the city until early January. Having retained The City of Sydney as a client for seven years, independent creative experience agency Imagination is behind the work. 'Wonder’ is the theme and it showcases vibrant illustrations by Sydney-based multidisciplinary designer and artist, Nadia Hernández. The City of Sydney and Imagination say they have continued
their commitment to fostering local creative talent. Around 600 banners with five designs will be displayed around the Sydney CBD. Imagination director Heath Campanaro says the agency’s ongoing relationship with the City of Sydney remains a "creative dream". The City of Sydney sits alongside other Imagination clients such as Ford, Westpac, Samsung, Mastercard and Lend Lease.
What do you make of the bold illustrations? Comment below and share your views.

Out of home media company Adshel has won the seven-year contract for Metro Trains Melbourne (MTM). As of 1 April 2018 Adshel will add MTM’s 15 rail lines and 218 stations to its current offering across Sydney Trains, creating a single network aimed at travellers across both cities. The partnership sees Adshel roll out more than 150 new digital screens at Melbourne CBD and inner city railway stations including Flinders Street, Melbourne Central, Parliament, South Yarra and Richmond. This adds to its Sydney locations including Wynyard, Martin Place and Town Hall. Adshel CEO Mike Tyquin says the business is committed to audience focus, technology and innovation. Last month JCDecaux finally confirmed that it had won the major Yarra Trams outdoor contract in Victoria, and plans to install more than 300 digital screens across the network in 2018.

ARN has hired former Daily Mail commercial director Mason Rook as its new commercial director. Mason will be responsible for leading the Sydney and Brisbane commercial teams and will report to chief commercial officer Emma-Jayne Owens. He has more than 15 years of media experience in TV and digital sales from his roles at Seven Network, and Ninemsn/Mi9. He starts his role in January.