New York Times backs native in print, will it boost the ad style in Australia? 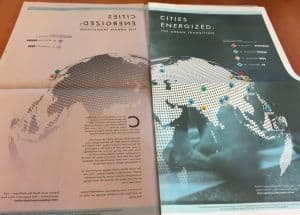 The New York Times extended its native offering yesterday, launching an eight-page wrap in print for advertiser Shell, which, for subscribers, covered the whole paper, and, for bought versions, wrapped the business section.

The paper has been known for pushing the boundaries in native advertising, producing elaborate online sponsored pieces, however this is the first time that the paper has created something of this scale in print.

Fairfax Media's managing director of content marketing, Simon Smith, told AdNews that The New York Time's execution was first-class, and said Fairfax had been experimenting with native content in its print mastheads for some time now.

“From a print perspective that's new for them ... [but] it's not new here,” Smith said.

“We've been doing that particularly in the last six to 12 months, across certain mastheads and certain brands - looking at print and native in a new way - and I think we've broken some ground about how we look at native across print platforms.”

While more of Fairfax's native executions are still done in digital, Smith hopes that The New York Times wrap gets brands talking about how they can utilise the advertising style in print.

“If it starts more conversations in markets like ours, from brands looking to engage with high-valued audiences, we welcome those conversations and those opportunities,” he said.

The print creative of The New York Times wrap extended to a web version, with infographics that show the urbanisation of the world’s population. The execution is extended further through the use of augmented reality, with users of the Blippar app (augmented reality camera app) able to view a video by holding their phone over the page.

The debate has previously raged about the blurring of the lines between church and state, or editorial and commercial, with former Life Media Boss of Fairfax, Melina Cruickshank, telling AdNews that the responsibility lies with lifestyle verticals to look into native advertising and other new revenue streams.

“So I see it as Life Media's responsibility to really grow all of these new revenue streams so that we can fund that quality journalism that Fairfax is responsible for.”

However, when asked if the native execution from The New York Times was blurring the lines between editorial and advertising, Smith said that consumers could clearly tell that the wrap was an ad.

“The wrap looks like an ad. Its a wrap of the masthead and the content sits inside and the audience are savvy enough to work out it's branded by Shell. It says it's from Shell, it's an ad,” he said.

Smith explained that where the ad sits inside the paper, it is closer to “true native” because it’s sitting next to the environment that it's relevant for.

"At the end of the day, consumers have a choice: they can choose to read that wrap or supplement or they can choose not to. Our view is that if the content is produced well, and if it's relevant to the audience and what is around them, the audience will engage with it.”

News and Fairfax agree, readership is a better measurement than circulation
News a no go for native says Life Media boss as it seals $3m Dan Murphy's deal
Return of the native: How to measure advertising's great white hope