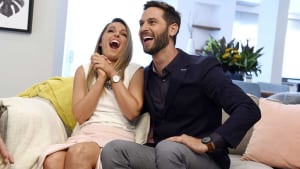 Dean and Shay Paine from Nine's The Block.

The live auction episode of Nine's The Block has topped the ratings, with 1.8 million people tuning in to watch Dean and Shay Paine crowned the champions of 'The Blocktagon', according to OzTam overnight figures, but the series is down from its last finale episode.

Despite topping the ratings, The Block series was down from the finale of its last season, aired in April this year where the finale episode picked up 2.03m viewers across the five metro markets.

The first half of last night's grand final episode picked up 1.6m viewers and was the second most watched show of the night.

By demographic, The Block winner announcement and grand final was the first and second most watched show in all age brackets including 16-39, 18-49 and 25-54 ages.