Leicester's EPL title worth $290M - but what's the value to sponsors?

One of English football's greatest ever underdog success stories is providing plenty of riches for the club, sponsors and fans alike.

But its not just the handful of lucky punters that put a wager on Leicester winning at the start of the season who stand to make a windfall.

UK sports marketing agency Repucom estimates the title could be worth up to £150 million ($290 million) in prize money, TV revenue, Champions League participation and boosts to ticket and hospitality sales.

For the club's major sponsors, the benefits are obvious – much greater exposure than they could have imagined. The TV audience for Premier League games is 4.7 billion.

The travel retail group King Power is Leicester's naming rights and shirt sponsor. Throughout the season, 64% of all King Power digital content engagement was down to to its relationship with Leicester City, according to Amobee Brand Intelligence data.

Sentiment for the brand was 27% positive and 54% neutral, which closely matched that of Leicester City Foxes.

Although this is high for a brand few know outside of Asia, because King Power is owned by Leicester's Thai billionaire owner Vichai Srivaddhanaprabha, it's unlikely the full value of naming rights sponsorship will be realised, says Gemba CEO Rob Mills.

“There will be tactical opportunities to up sell in some sponsorship categories, but the large sustainable lifts will only come when the market is confident that the improved performance is sustainable,” he tells AdNews.

Mills says a major draw for Leicester's sponsors will be qualification to Europe's premier competition - the Champions League - which will provide at least one year increased global exposure.

“The key challenge is for Leicester City is to use the additional funds available and the prestige gained from this year’s performance to build a sustainable model,” Mills adds.

“By investing in the right talent, both on and off the pitch, there is an opportunity for the club to break the relegation and promotion cycle and become a stronger commercial proposition.”

It's fair to say that Leicester's transfer record in the past few seasons is nothing short of remarkable compared to more illustrious rivals. However, there are question marks over whether the club will be able to hold onto star players, whose values and interest to much bigger rivals will have risen exponentially.

But that's a problem for another day. For now, the East Midlands club, its fans and commercial backers will celebrate the biggest upset in English football history.

Leicester winning the league triggered an 86% increase in normal Twitter activity in the UK.

This included 5.5 million tweets about Leicester's victory around the world. Click on this heatmap:

Leicester's victory Tweet became one of the most retweeted sporting Tweets in history. 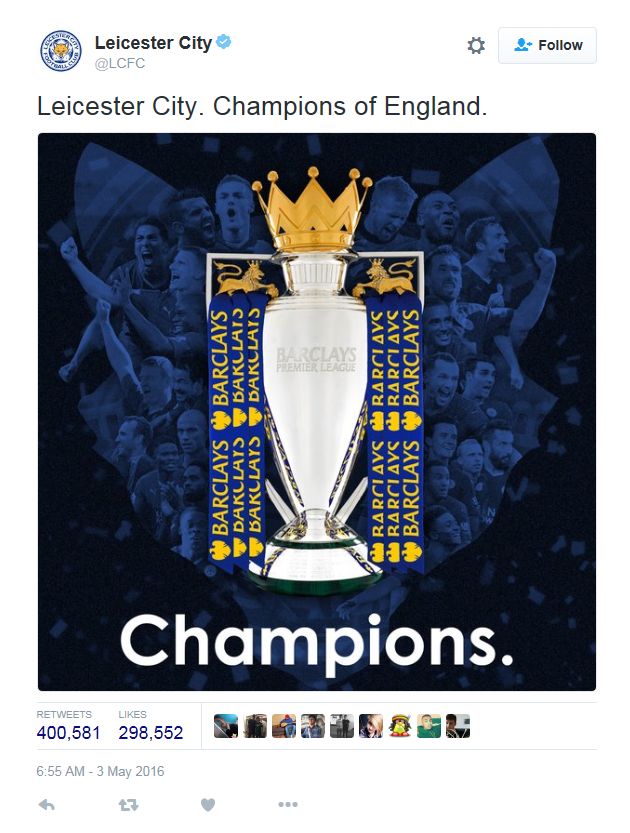 And to celebrate, there were more tweets mentioning 'party' than there was during New Year 2016.