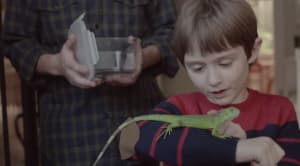 US IT company Hewlett-Packard needs to be given the 'dunces hat' and should issue an apology following its latest ad campaign, according to an Australian charity.

The tech firm has come under fire from the Invasive Species Council after its latest advert and coinciding #HelpFindRalph campaign highlighted the 'illegal' iguana has a household pet.

The campaign features a young Aussie boy discovering that Ralph, his pet green iguana, has escaped, and ends with relief when it is returned after using HP products to help with a city-wide search. People can look at pictures of Ralph on Twitter to guess his location in order to win various HP products.

The import and keeping of green iguanas is illegal in Australia and attracts significant penalties.

“We reckon HP should be sent to the dunce’s corner for not doing its homework. If Ralph was the pet of an Australian kid, the owner’s family would be in hot water. It also puts our Australian wildlife at risk,” the Council said.

While HP’s competition rules require participants to act legally, in a blog post from the Invasive Species Council, it says their product promotion could encourage Australians to break the law.

“Technology giant Hewlett-Packard has made an embarrassing gaff in its latest Australian marketing campaign by encouraging people to help a young boy find his pet iguana, Ralph,” the Invasive Species Council said on its site.

“Production values used in the marketing campaign are all very slick, the only problem is that it’s illegal to own iguanas as pets in Australia. Apart from the error being highly embarrassing for the company, it’s also a worry that it could encourage people to buy pet iguanas, increasing the risk that they will one day escape into the wild.”

The not-for-profit organisation, which has a board of about 200 members and more than 1,000 supporters, now says the responsible course of action for HP is to issue an apology and do all it can to reverse the “dangerous message it has been sending out” through its marketing.

It says the green iguana is officially rated as an extreme risk of establishing in the wild in Australia and becoming a major environmental pest. If a breeding pair of green iguana pets escaped their descendants could spread over large areas of northern and eastern Australia.

The council says researchers have found that when animals are promoted in the media or movies they become more popular as pets – as was the case with clownfish due to the Finding Nemo movie. It also noted that authorities have regularly found illegally kept pet green iguanas in Australia and that increased demand leads to increased smuggling and trading.

“The fact that HP was oblivious to the threat also shows that much more needs to be done by authorities to warn of the dangers of illegal pet ownership,” the council added.

The Invasive Species Council has written to HP requesting that it immediately halt its “irresponsible” campaign and warn Twitter, Instagram and Facebook fans that keeping the green iguana in Australia is illegal.