Back to the future: Can Mat Baxter predict the future?

Back in 2005, for The Annual, AdNews asked industry figures including MCN CEO Anthony Fitzgerald (still in the role), then CEO of Mindshare Chris Walton, now CEO of Nunn Media, and many more, to predict what the state of play would be in a decade. That's now. We decided to revisit those predictions and see who was right – and who was wrong. Over the next few days we'll be revealing who had an accurate crystal ball a decade ago – and who was frankly full of shit.

Have ad agencies become less about ads and media agencies less about media? We revisit Mat Baxter's industry predictions from a decade ago, and see how the then partner at Naked Communications, and now, global chief strategy and creative officer at IPG Mediabrands, faired.

“It would be foolish for anyone these days to claim they could predict what would happen next month let alone next year,” says Baxter from New York.

As partner at Naked Communications in 2005, alongside Mike Wilson (now Havas CEO) and Adam Ferrier (now Cummins&Partners global chief strategy officer/ partner), Baxter told AdNews that advertising agencies would be less agency centric; would expand services to include events management, content creation, viral marketing and a whole host of emerging media. He also added that they would be less involved in strategy and more involved in production and implementation.

In addition, he said there will be more convergence between media and creative agencies.

“Advertising agencies have begun to recognise that a talented media person is as critical in the creative development process as a copywriter or art director. They need to re-inject media skills back into their business, via media agencies or in-house creative media planners,” Baxter said a decade a ago.

“In the future, media agencies will have creatively driven thinkers which are ideally suited to working with advertising creative”

As CEO of UM, in February this year Baxter claimed it was no longer a media agency and shifted away from its 'Big Boutique' message, calling itself a "creative connections agency", reflecting the broader shift the entire industry is making towards owned media.

Speaking to AdNews on his previous comments 10 years ago, he said it “would be foolish for anyone these days to claim they could predict what would happen next month let alone next year.

“So, only the truly mad would try and predict what will be happen in a marketplace defined by change - so this idiot is not only going to reflect on his predictions from 10 years ago but have an idiotic stab at predicting what might happen in the next 10,” he added.

Baxter said truthfully, his predictions back in 2005 were a little more accurate than he expected.

“Today we see creative agencies with broader remits. They are tackling an ever-increasing number of communications tasks for their clients. The good ones have successfully pivoted their businesses away from being advertising centric to solutions centric. Of course,  there are plenty of new entrants challenging them for this position too.”

“I believe this prediction has come to pass. In 2015 we are seeing media agencies extend their service offerings to include everything from content to social. Some have even hired "creative directors" in their businesses - that sort of thing was unthinkable 10 years ago,” Baxter begins.

“But my most poignant prediction of all was this: That creative and media would come closer together. That creative agencies would acknowledge the value of good media thinking as they develop their creative product. This evolution (although you could technically call it a return to the past) would be the single biggest change we would witness in our industry.

Click the images below to read what was predicted in 2005 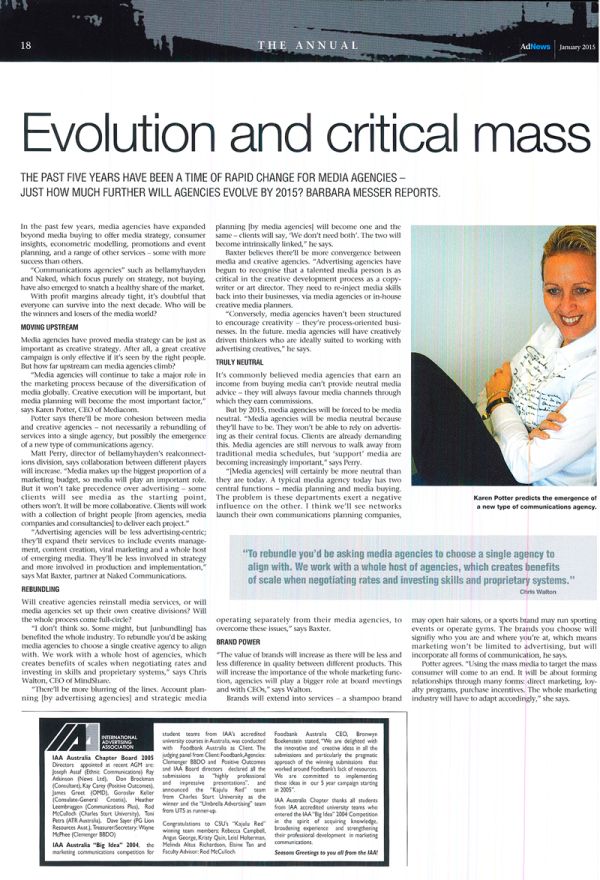 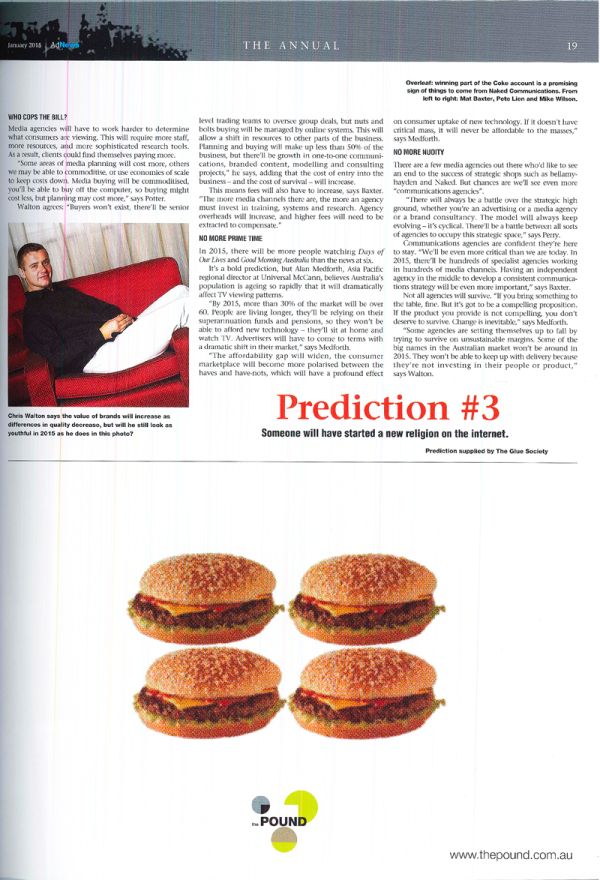 "And here we are, 10 years on. And it's no coincidence that Australia's fastest growing agencies (think Cummins&Partners) and the world's best (think Goodby, W+K or Droga5) have successfully infused media talent into their creative teams - just as prophesied all those years ago. Who says that you can't predict the future?”