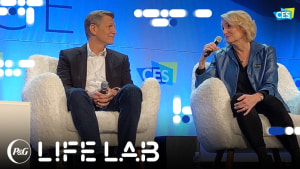 "I would say that the days of advertising as we know it today are numbered," P&G’s Marc Pritchard declared on stage at CES.

"We need to start thinking about a world with no ads."

Pritchard, who has been outspoken in the past about the murky digital supply chain and ineffective advertising, highlighted various P&G offerings that could take the place of traditional ads in a video presentation.

For example, he touted the power of a P&G’s new sustainability-driven cleaning brand, DS3, which doesn't require water to be used.

"When you think about an IoT technology on a daily basis and it's giving you feedback - that's a lot more useful than an ad," Pritchard said.

"When you have these types of technologies embedded in products, it actually makes them more central to the brand building experience.

"I think it could eventually replace advertising as we know it."

With P&G one of the world’s biggest advertisers, Pritchard’s comments could be seen as a warning to agencies. The top marketer had led an overhaul of the marketing structure at P&G, reducing the amount of agencies it works with and bringing more media in-house.

Speaking at a separate talk at CES, Unilever outgoing CMO Keith Weed also discussed how digital technology has impacted the function of marketing.

"When I go back to when I first started marketing a few decades ago, we were using second-hand data from retailers that was three months old to predict what was happening," Weed said.

"What we can do right now, of course, is in real-time, in a very agile way, know what people are doing and indeed know how people are acting."

Their comments are a reflection of the changing nature of the marketing department and the chief marketing officer role.