Big punts on the Big Bash 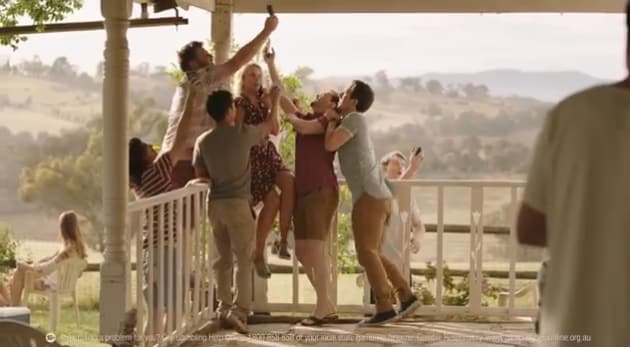 With the Big Bash on the horizon, Sportsbet presents a series of conundrums Aussie punters will face over the summer.

Sportsbet is having a bash at another campaign this summer, tying in the domestic T20 cricket competition to a series of TV commercials which extend upon a previous theme.

In a series of three ads, a group of men confront the disturbing reality of trying to carry on their daily lives while the cricket is on.

In one ad, a weekend away is thrown into utter chaos when the men discover they have no mobile phone reception so they can bet live on the Big Bash.

Once they find the one spot where they can find reception, they flock there so they can put a bet on, abandoning all principles of social convention in the pursuit of a punt.

In another, a man carrying entirely too many shopping bags has to prove his masculinity by carrying all the shopping bags at once while another man looks on, silently judging them.

The stakes are raised when the judging man asks the man carrying the shopping bags whether he's going to put a bet on the Big Bash. With limbs failing, he still finds the strength to take his phone out of his pocket and put on a bet while maintaining the illusion of casual strength.

In the final ad, two mates enter the gym and start to lift weights.

With our hero of the second ad spotting his mate during a particularly rigourous bench-press, he is distracted when the Big Bash comes on the TV at the gym.

He then is prompted to whip out his phone to check how a boundary has affected the odds on the match, all the while his friend struggles under the burdensome weight.

The ads start airing this week.

Breaking out the (bad) moves for a good cause

No Child Left Behind