Protect Yourself From Yourself

Bonds has launched a new campaign in a bid to rid the world of men's pit stains and butt cracks. Created by Clemenger BBDO Melbourne, 'Protect Yourself from Yourself' promotes Bonds' Flexits Undertee and Guyfront Trunk with two executions – one of a young officer worker who sabotages his own presentation every time he raises his arms, and another featuring a guy inadvertently flashing his butt crack to a girl in the park.

Clemenger BBDO executive creative director Ant Keogh says the campaign is designed to both "entertain and educate" Aussie men. "Sometimes, without even realising it, guys can be their own worst enemy. The moral of this campaign is to pay attention to your underwear drawer and keep things up to date,” he said. 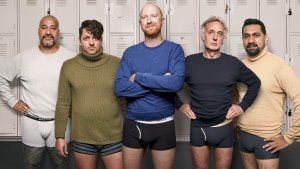