It's Countdown of Awesome time again from your good friends at UM, Tom DiSapia and Robert Bellamy.

This week we can't get enough of Game of Thrones Series 4, Google+ teams up with Man U for pledged fans and we meet the next big thing in slurpees...

Game of Thrones Season 4 premiered this week breaking all pirating records. Netflix crashed the party with this sly and awesome tweet proving sometimes timeliness and a sense of humour are all you need. 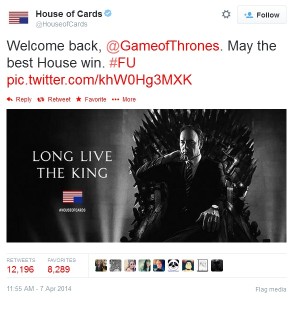 Built on insight that every Slurper’s aim is to maximise the volume of their cup (often ending in spillage), they created the Xpandinator. A free add-on developed to exploit the prime real estate above the cup and in turn give Slurper’s even greater value.

3. Hangin’ out at Old Trafford

Man U has a global following; therefore a lot of their fans aren’t even from England. For many, cheering the team on at Old Trafford is on the bucket list but never ticked off. A partnership with Google+ connected a select group of fans to the stadium, helping them become an integral part of the game without even leaving their lounge rooms. 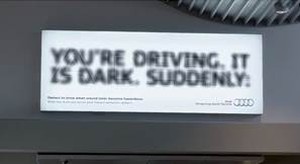 To demonstrate their preemptive in-car hazard system, Audi reminded people just how easy it is to overlook oncoming threats. The company literally hid ‘a deer’ in a billboard which could only be read in close proximity to the ad. Hint: Take a closer look at the image above.

A really simple insight that guys hit vending machines when they don’t get what they want. Unfortunately the same can be applied to their spouses. This vending machine purposefully antagonises guys by not giving them the goods to show them that it’s a slippery slope towards domestic violence.