Zoo hits back as watchdog demands removal of 'vile' content 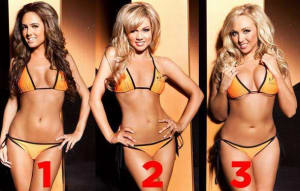 An image on Zoo's Facebook page which encouraged viewers to pick which woman they would choose.

Zoo Weekly has fired back after the ad watchdog upheld complaints against content on the magazine's Facebook page, which encouraged users to vote on scantily clad women.

Zoo has said the material should be seen as editorial and not advertising, hence refuting the ad watchdog's ruling.

The ACP-owned men's magazine has several pictures of half-naked women either alone or in groups on its Facebook page, accompanied by text encouraging viewers to choose which woman they find the most attractive and why.

It also has pictures of women touching their breasts and asks viewers to rate their assets on a scale from 1 to 10.

The watchdog received a number of complaints about the material, with consumers arguing the page breached several codes about discriminatory and sexist content.

One complainant said: "Both the pictures, the questions that are posed and the responses are regularly demeaning and unacceptable to women. Women are objectified and sexualised. Zoo encourages its young male market to comment as to how they would use this woman's body for their own sexual gratification. It demeans and degrades women."

The consumer also criticised the magazine for posting such content on a public platform such as Facebook, as it was possible to be seen by young people and children.

Another argued: "I was extremely offended by Zoo's posting of these images, its provocation to get readers to respond, the behaviour and utter bile that its commenters posted. They were vile and degrading toward women, de-humanising and disgraceful. Unacceptable in every way."

One image, which showed three women in different coloured bikinis and asked viewers to choose, generated comments such as "I like rainbows, does that mean I can have all three?", and "red, as she will match my car".

Zoo, however, not only refuted the complaints about its content but denied its Facebook page could not be classified as advertising and said it was just its editorial team's way of engaging with fans.

The ASB ruled earlier in the year that all material posted on a brand's Facebook page was classified as advertising and marketing, and said companies on social media must self-regulate to ensure content is in line with its Codes.

Zoo argued: "The posts in question were all editorial material posted by the editorial team, speaking to a group of fans who are already familiar with the content they have chosen to follow Zoo for. This again confirms my opinion that the material in question is neither advertising nor marketing in any form.

"All our content is posted in a way that engages followers to poll their opinion via the like buttons and share buttons. All our editorial content is (in magazine, online or through social media) intended to be funny, topical and easy to respond to without judgement."

After studying the case, the ad watchdog ruled the content was a breach of several sections of its Codes and said the content vilified, discriminated and degraded women and also featured inappropriate language.

Zoo continued to fight the watchdog's ruling and argued again its Facebook content shouldn't be classified as advertising.

"To describe Zoo's Facebook page as a 'marketing communication' is to misunderstand the nature of modern media organisations and the way in which they use social media to engage with their audience.

The magazine did not specify whether it would take down the content or not, but said it would "continue to review its editorial policy".

It was unavailable for contact at the time of writing.