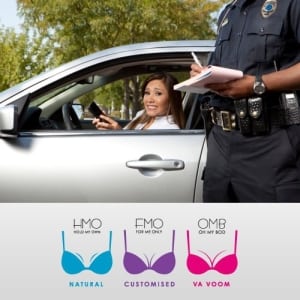 The ad watchdog has dropped a case against lingerie brand Pleasure State despite several social media complaints and one consumer claiming the image encouraged "pseudo prostitution".

The ad watchdog has dropped a case against lingerie brand Pleasure State despite several social media complaints and one consumer claiming the image encouraged "objectification" of women.

The luxury underwear brand's ad, upload to its Facebook page, showed a female driver who had been pulled over by a male police officer. It was accompanied by a graphic of its bust-enhancing bras and the question "Getting out of a parking fine. Cleavagely Correct?".

The complainant told the Advertising Standards Bureau (ASB): "This ad is offensive, tasteless, unimaginative, and objectifies women. Anyone trying to justify the ad as acceptable clearly has no understanding of how raunch culture harms women, nor do they have any respect for women.

"It conveys the message that it’s appropriate for a woman to use her body to absolve herself of any form of adult responsibility, which in my view amounts to nothing less than pseudo prostitution.

"I shudder to think of the message this ad sends to teenage girls - that if you use your body to avoid having to take responsibility for your actions, the ends justify the means. This perpetuates not only a lack of self-respect and continued objectification, but sends the message to men that engaging in such behaviour is appropriate."

The controversial image also attracted several social media complaints, with one user arguing: "What about those women out there who are flat chested? Or does this product only fit one type of woman? What is this saying to our next generation? COME ON!".

Others claimed the ad was "sexist and demeaning" and "if the product was any good you wouldn't need sexism to sell it".

However, some defended the image and refuted complaints it gave a negative message. One person said: "It's an advertisement for crying out loud, a marketing ploy to gain attention and it has worked!! I find it funny!"

Another added: "This ad gets to the point and causes discussion. The marketing department has won here."

Pleasure State also hit back, submitting the following response to the ad watchdog: "In our view the advertisements are very clearly relevant to the products advertised, do not portray people or depict material in a way which discriminates against or vilifies any person or section of society in any grounds, [and] do not employ exploitative or degrading sexual appeal."

Following this, the ASB sided with the brand and moved to dismiss the complaint.

It said: "The Board considered that the advertisement was depicting a fanciful situation and asking if such behaviour was appropriate. The advertisement is not demeaning to women nor is it discriminatory. The Board also considered that the suggestion that a woman might try to avoid a fine by showing her cleavage makes no strong inference about the behaviour of police officers and whether or not they might be swayed from giving a fine by such behaviour.

"The Board considered that the depiction of the woman and the police officer was intended to be humorous and while it presented a stereotypical situation, it did so in a manner that was not demeaning."