Fairfax, Seven scoop top gongs in the 'only' awards you don't have to pay to enter 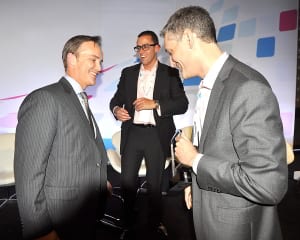 Yesterday's Media Sales Summit saw the inaugural Media Company and Media Brand of the Year Awards handed out, with Fairfax and Seven taking the top honours.

The awards were based off the findings of the AdNews Media Benchmark Study, conducted by Roy Morgan, which surveyed almost 1,300 respondents across media sales, agencies, marketing and PR.

Kurt Burnette, Seven Network network director of sales, accepting the award from Mediabrands executive chairman Henry Tajer, said: "You won't hear us shouting from the rooftops – we just get on with it. But this will help."

Unlike other media awards, he added, it was nice to win an award that you "didn't have to pay to enter". Fairfax Metro Media commercial director Ed Harrison concurred.

"It is. It was very objective in terms of the way the research was conducted," he told AdNews. "It didn't come down to the quality of the entry – it wasn't a sales pitch from us.

"We're absolutely thrilled to see that through the period of enormous transformation we're going through, we have a huge level of support from all our clients and agency partners, and it's really gratifying to see that that's the case.

"It's tremendous that AdNews and Mediabrands are supporting excellence in media sales. There's very few events that cover that ground and I think we saw yesterday that there's an appetite for it, and we hope that it will continue."

"We're particularly pleased to be recognised for the level of innovation coming out of the business," Harrison said. "To be ranked second only to Google was a fantastic result."

Roy Morgan Research general manager media and communications George Pesutto presented the findings, which revealed, among other things, that while media sales ranked reasonably well in terms of overall satisfaction, in terms of 'very good' – the key metric – it was one of the lowest, second only to agriculture. "Only farmers feel like they're worse off than media salespeople," Pesutto said.

More contentiously, the research found that media sales people think media agency planners have too much responsibility for their experience. On the flip side, agency people think media owners need more skills in integration and cross channel selling. They should invest to get it too, said respondents.

The full report, which will be available for purchase tomorrow from Roy Morgan's Online Store, offers a comprehensive 'health check' of the industry, covering a broad range of topics across the spectrum of media sales. Don't be left in the dark – grab your copy. Tomorrow.