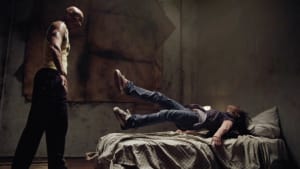 MTV’S EXIT (End Exploitation and Trafficking) initiative has launched the next instalment in its global advertising campaign.

The harrowing spot tells the story of a young Asian girl who has been promised a job as waitress in a foreign country. She farewells her mother with an emotional goodbye and before long, is faced with a reality that is far from what she imagined. Forced into a world of sex slavery, she is stripped of her clothes – and human rights – and forced to obey a terrifying man.

The short film is the brainchild of Sydney agency 18 Feet & Rising. It follows an EXIT push in November last year which featured a song written by Canadian rock band Simple Plan called ‘This Song Saved My Life’. The campaign also recently picked up a Gold World Medal at the 2013 New York Festivals Film and TV awards.

However, the new campaign has a twist. The song, ‘False Hope’, was penned entirely by the agency’s former partner and executive creative director, Dejan Rasic. Rasic, who is now freelancing, told AdNews: “This was an opportunity to create something bespoke and give them something they could own as a communication tool. The more we can educate around the issue, the more we can fight it.”

Rasic has worked with EXIT since 2007 on a range of different campaign initiatives.

The song was performed by Athens-based artist Alex Kavvadias, who grew up in Australia, with film production by Juliet Taylor Productions. The new ad is the fifth in the series, with major artists such as Radiohead, The Killers and Muse getting on board for previous collaborations.

The broader EXIT initiative comprises TV advertising, short films, online content and live events. First launched in Europe in 2004 and expanded into Asia in 2007, EXIT also works with anti-trafficking organisations such as World Vision and Save the Children.

This article first appeared in the 3 May 2013 edition of AdNews, in print and on iPad. Click here to subscribe for more news, features and opinion.