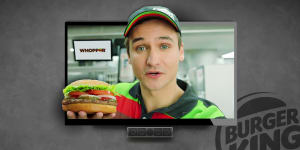 Voice technology is the newest tech on the block, as assistants such as Amazon’s Alexa and Google Home build a stronger presence in the market. Talking computers, once seen only on the silver screen, are becoming an everyday reality, at users' beck and call as developments in artificial intelligence transform users' relationship with them.

With home devices yet to launch in Australia, most users’ experience of voice technology comes from customer service lines, search and Apple's Siri. Voice marketing has generated widespread interest, but it has seen slower adoption rates than in other Asia-Pacific markets, finds a report conducted by WPP agencies JWT, Mindshare and Kantar.

Globally, brands have begun to take notice of voice marketing. Burger King won a Grand Prix at Cannes Lions this week for its foray into voice marketing, hijacking Google Home as part of a publicity stunt.

While Google Home isn’t available in Australia yet, its launch is expected later this year and is likely to drive further adoption of voice marketing in the Australian market.

ComScore forecasts half of all searches will be voice searches by 2020, and by 2021, Ovum predicts that there will be more digital assistants than humans on the planet.

In the global study from WPP, 7000 respondents were surveyed to reveal that 45% of regular voice users globally say they use voice technology because it’s faster, and 71% feel that speaking to technology now comes naturally. 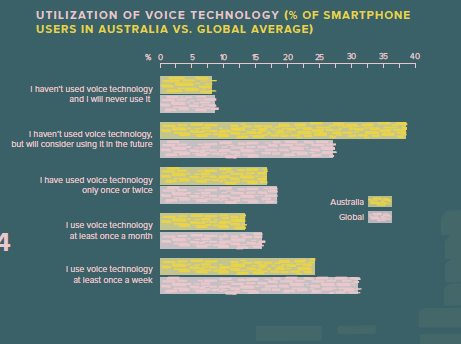 Utilisation of voice-assistant technology is lower than the global average

In Australia, the utilisation of voice-assistant technology is lower than the global average. Consideration of use is high, but there is currently a lack of awareness of the benefits: 36% don’t see the point of using voice technology, and 28% don’t expect it to be any quicker than text. Australia is polarised between a subset that is interested in technology, and a mainstream majority that lags in awareness and adoption of it. 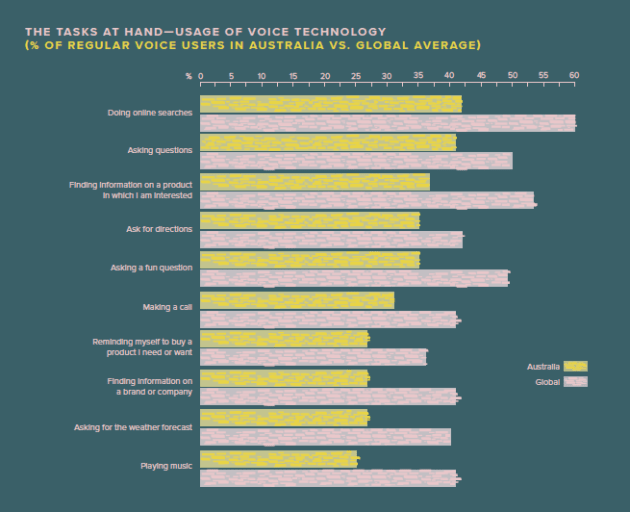 Australia is tracking behind the global trends on voice assistants

The report states that it’s unlikely the interruptive model of paid advertising will translate easily to voice, as users demand a more streamlined experience, which means advertisers will need to reappraise relationships with voice assistant providers as they strengthen their role as consumer gatekeepers.

Google Home customers in the United States made complaints when Google Assistant gave out unsolicited information about a new Disney film. Google quickly removed the ad but denied it was actually advertising.

The solution for brands, according to the report, will be to build services for Echo and home, offering companies the opportunity to create branded experiences over the platform. They hold limited promise for direct consumer engagement in the future. 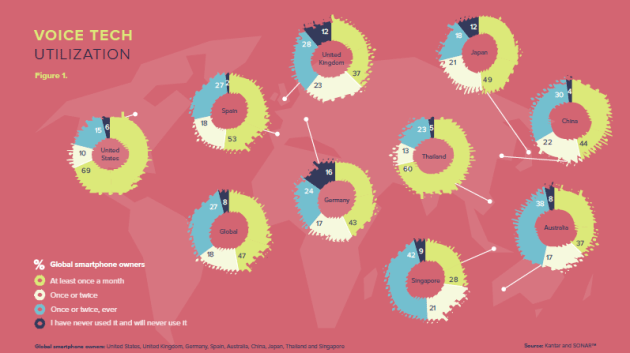 Local takeaways for how brands should approach voice

Australians are more permissive than other nationalities about privacy issues, so focus on communicating the value that your voice service brings, rather than its privacy credentials.

Be rational and functional:

The Australian relationship with technology is very rational, so brands should look to communicate the utility their voice services can offer.

Australians know that other markets are more advanced in terms of the convenience of digital services, so show how voice can raise the bar.