‘Putting the kettle on’: What people are really doing during ad breaks 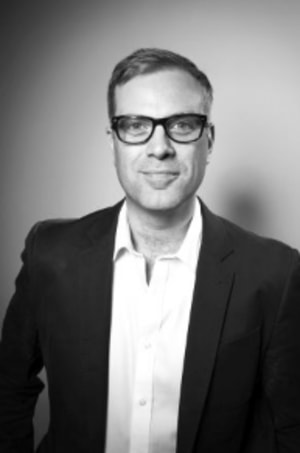 A lot of my time is spent comparing the performance of channels, formats, metrics and more. It’s the thing I’m asked to do most by marketers, who are grappling with measuring their media in a meaningful way.

But when I’m asked about how viewability compares across digital publishers I push back and ask how they measure viewability across non-digital channels. No-one has ever said they have.

So, I was delighted to read Dr Karen Nelson-Field’s latest piece where she quite rightly points out that attention is the way people build connections with brands through memory associations. As she succinctly puts it: “If you're not paying any attention you won't process (or act upon) what is right in front of your face!”

Understanding what captivates people will help us plan media campaigns to optimise the delivery of a message and measure markers which directly influence outcomes.

To start to get a handle on this we conducted a study[1] with Eye Square, an international research institute, starting with the most ingrained media behaviour, a night in front of the television. According to a Global Web Index report 74%[2] of Australians have their mobile phone within arm’s reach whilst watching TV, but we wanted to understand where they are focusing their attention in that time, and how much they take in. You can read the methodology at the end of this article.

Firstly, Australians really like their TV. Aussies are one of the more engaged audiences with programming across the global markets we studied, with 71% of attention from participants on the tele, compared to 23% on the phone. The other 6% split between staring at the room or other people. 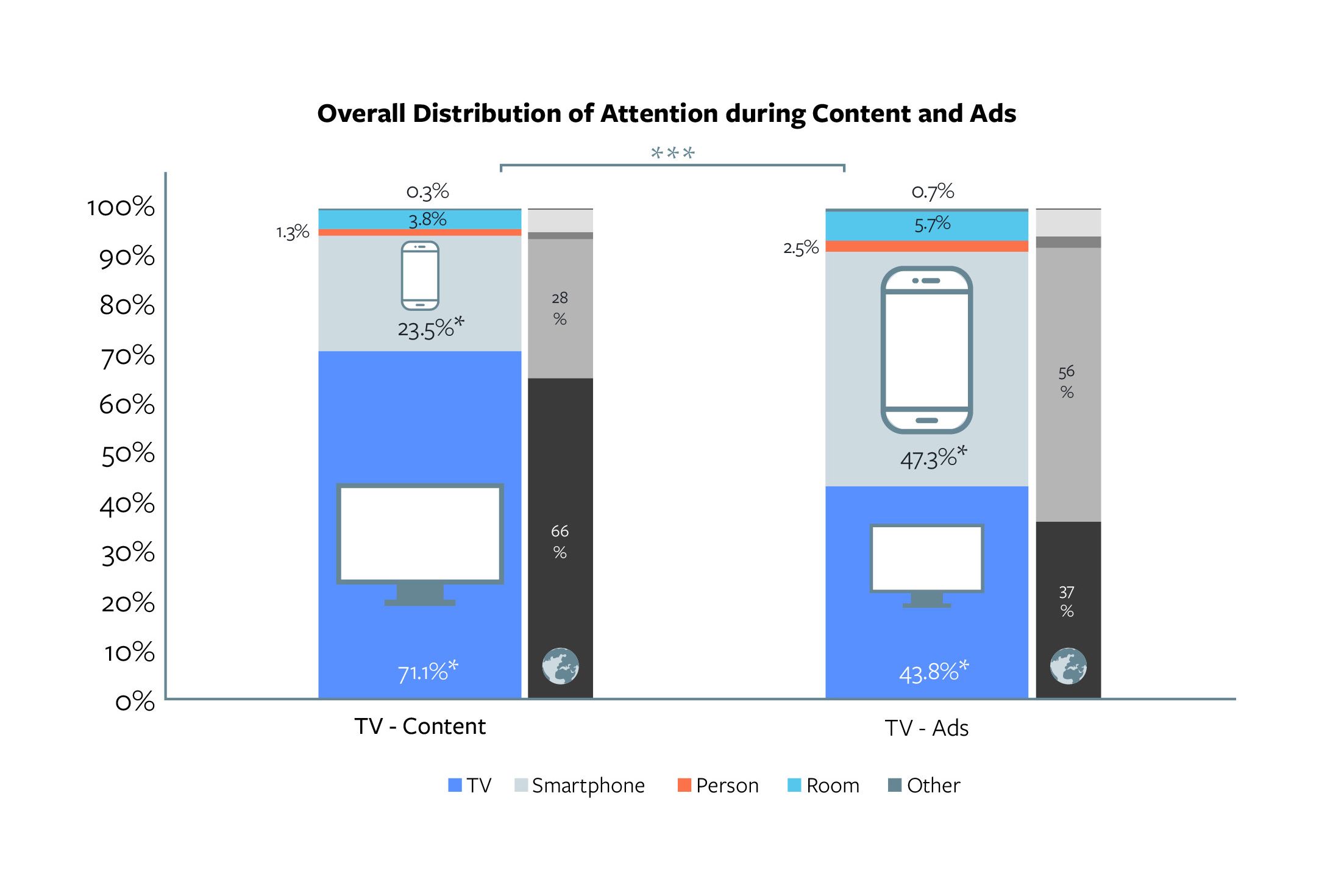 But when it came to ad breaks, there was a clear change in behavior and attention as people tuned out. Attention focused on TV amongst those studied dropped from 71% to 43%, whilst mobile grew from 23% to 47%.

A breakdown by age also gives a glimpse into emerging future behaviours. Our study showed under 35s ad viewing time dropped to 38%, with their mobile attention increasing to over 50%. This younger cohort is likely to represent the future total average in Australia as mobile use continues to become ingrained in behaviour.

We also delved into individual ad attention, measuring the amount of time participants in the study spent watching more than 1,700 15-second ads. It showed:

● The smartphone was the top distraction 85% of the time;

● On average, just 23% of people viewed 15 second ads to completion.

● The channel was changed in 33% of the ad breaks measured. 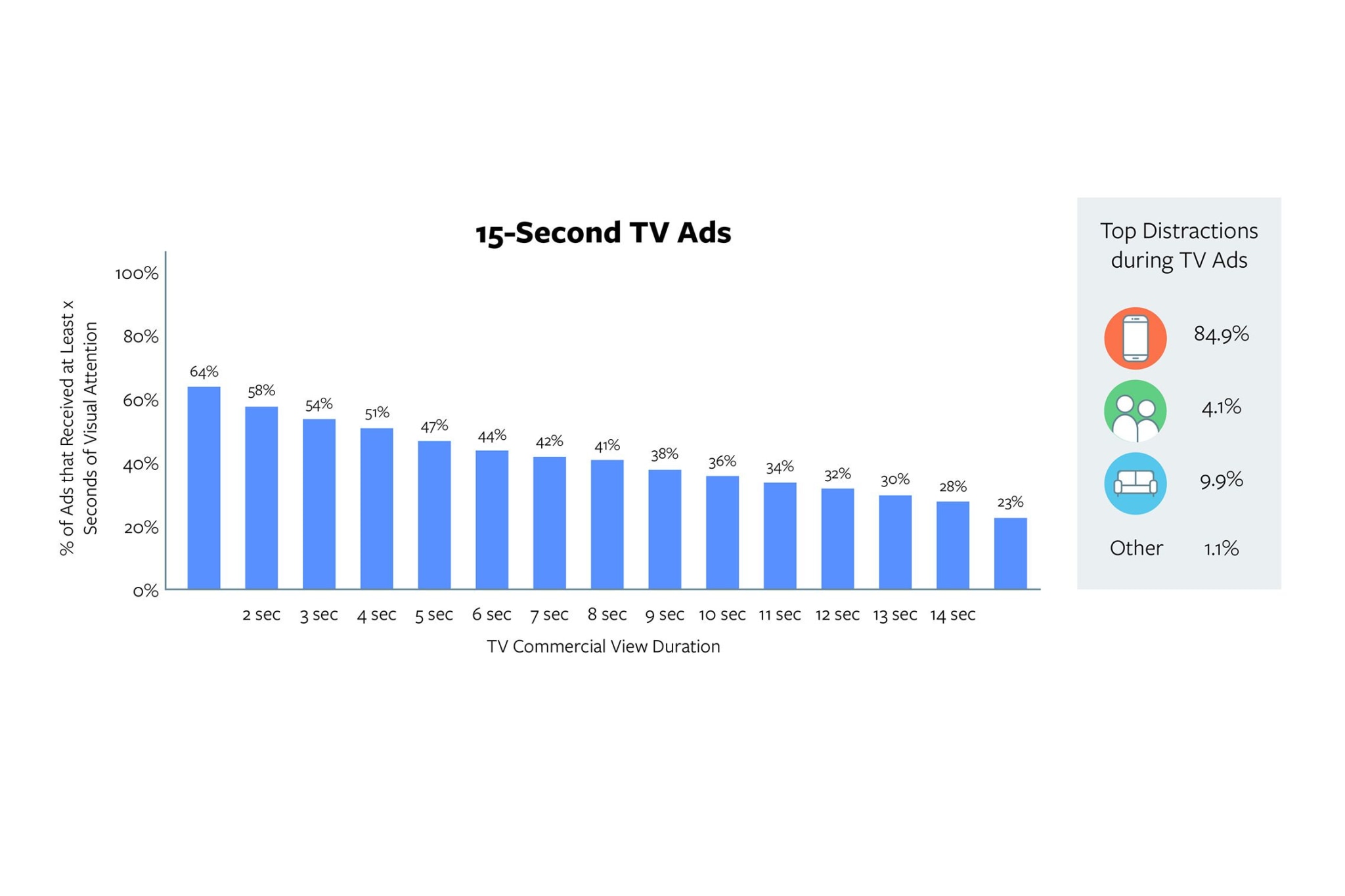 What impact does it have on consumers?

At the IAB Measure Up conference recently, I heard someone glibly dismiss the idea that people don’t always watch TV ad breaks by saying ‘there have always been cups of tea’.

Whilst TV measurement does account for this, statements like that don’t help in understanding the impact of the increased number of distractions in a modern home for viewers, where mobile phones are ever-present.

It also got me thinking about why we accept an ‘allowable’ view on wastage - or a lack of viewability - for ‘traditional’ media, but not for digital?

Maybe there is a need to rethink how we are executing this creative to be more aligned to attention, delivering key messages early, succinctly and more impactfully in all channels, not just digital?

A lot of this is probably unsurprising to you if you have taken a moment to think about how you behave. And the purpose of this study is not to run down TV advertising - as we’ve said before it’s a powerful and valuable medium.

But as Binet and Field’s recent work has found, it needs to be complemented by a strong social and digital element to be truly effective - it’s understanding how that works together now that is important.

That is also backed up by the work of independent consultants Analytic Partners, whose research into Digital and Social ROI shows “the synergy of using two different tools resulted in an average increase in ROI of 19% over campaigns using just one channel”.

Attention is a useful metric and much more aligned to outcomes, but it’s currently hard to recreate in an ongoing, sustainable way. So what can we do in the meantime? Here are a few suggestions:

1) Understand people’s attention and then plan your reach to be exhaustive across a range of channels instead of siloed. Utilise digital channels that can offer incremental reach;

2) With attention moving between screens, creative must be designed to have impact from the start. Do not assume an audience will watch all of your ad in every environment;

All of this shows a clear need for the industry to push towards a single, comparable measurement currency which at the very least correlates with sales and/or brand outcomes, if not drives them.

If we can get away from the vanity metrics which come with a traditional media mentality to have something which shows how good integrated marketing can move the needle for businesses, the better it will be for everyone.

Working with a company called Eye Square, an international research institute, we recruited TV viewers, with a mixture of single, couple, co-habiting households, as well as a number containing ‘natural’ distractions (children, pets etc). Respondents wore eye-tracking glasses during their prime-time viewing, which recorded how much time their eyes were on their TV screen, their mobile screen, and ‘other’ (eg, looking at a clock, partner, pet, etc.). They were watching a linear TV feed, so were not able to fast forward ad breaks but could change channel. As well as Australia the research has run in six other countries including the UK and US, giving us robust samples (over 760 people) which provided consistent global themes and Australian nuances).