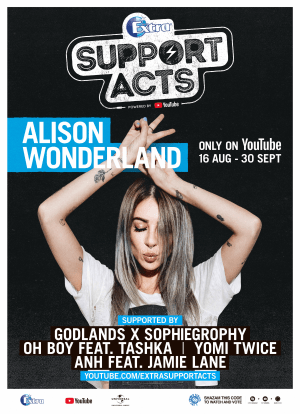 Wrigley’s Extra Gum is transforming YouTube pre-roll ads into a talent show for upcoming musicians in an effort to combat declining category sales.

Called The Support Acts, the program puts pre-roll ads of 16 of Australia’s up and coming musicians ahead of music videos from Alison Wonderland, The Rubens and 360.

The campaign, the first of its kind in Australia, was created partnership with Clemenger BBDO Sydney as creative lead, Universal Music Australia and its in-house agency, Bring, for talent, music strategy and content, MediaCom, and YouTube.

An algorithm then aggregates the number of views, likes and shares of their videos to determine which Support Act had the most engagement from Australian music fans.

The Support Acts with the most engagement in their group will be crowned the winners and enshrined as Australia’s next big artists.

Speaking at a launch event held in Sydney yesterday, Extra Gum marketing director Alison Levins said the campaign aims to shift the brand’s advertising from a functional approach to emotive.

She admitted that the previous campaign for Wrigley’s, that featured various animated characters showing the functional benefit of chewing gum, wasn’t recruiting new customers, specifically those aged between 16-25.

“The gum category here and globally has been in decline for about 10-15 years and it’s the same pattern we see in every market. The younger generations had skipped over the category,” she said.

“Gum used to be quite cool back in the day but we missed a bit and realised we needed to take a change in direction and move away from function to more emotional messaging.”

This insight drove the brief delivered to Clemenger and MediaCom with the aim of positioning Extra within culture, Levins explained.

Universal Music Australia MD of new business Roddy Campbell says the campaign is one of the better branded music platforms because it creates value for consumers and artists alike.

“Our acts have been so passionate about supporting the next generation of talent and I think that shines through in the engaging content we’ve created with them. We can’t wait to see how the journey unfolds," he says.

Australians can head to www.youtube.com/ExtraSupportActs to find their new favourite musician, and make their vote count by watching, liking and sharing.