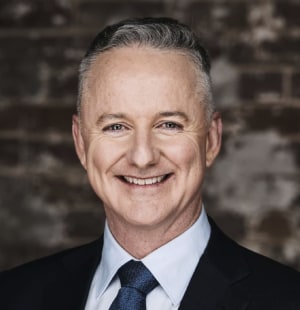 There are many factor driving Nine's improved performance this year, but a couple of indicators that have been largely overlooked by the media will be vital for driving success in the future.

This year, Nine has been much more effective at squeezing more revenue out of commercial partnerships and a big part of Nine's future will revolve around getting all of its platforms and touch points to work towards growing revenue.

After acknowledging Nine's excellent local content slate, which has rolled out tent pole hits like the revamped Married At First Sight and wildly successful Australian Ninja Warrior, CEO Hugh Marks tells AdNews its the integrations piece and a 16% lift in 'premium revenue' that has helped the network turnaround its performance this year (see graphic below).

“We re also understanding better and engaging better with how we work with clients across our shows and our platforms and that's starting to deliver us results in a revenue sense,” he said.

“That is, from my perspective, where we need to continue to drive results. It's about working with people to achieve solutions rather than just an advertising outcome.” 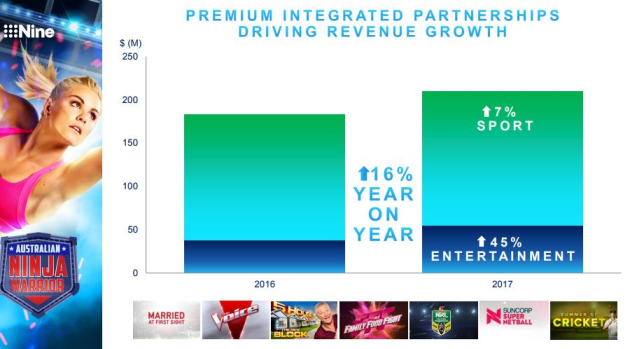 An example of the integrated model working well can be found with The Block. This year, Nine has 27 partners and sponsors featured in the show ranging from a pop up McCafe serving contestants coffee on site to existential players like Domain, Mitre 10 and range of suppliers that provide everything from Freedom kitchens, Bluescope Steel, Forty Winks beds, Beacon Lighting and so on.

“The thing we haven't yet extended to but we will over the course of the next year will be taking that into social even further than we have today and also looking at how we approach the clients' owned and operated media platforms in terms of how they can leverage our content for their purposes.

“It will be a new metric around 'what's my outcome across all of this experience', which often is very naturally aligned to what that client's product is. I would argue it's the premium and best advertising experience you can get in market.”

An important part of closing the loophole on how networks monetise the whole viewing ecosystem is extracting more value from non-linear platforms. This can include encore linear audiences from repeat shows, incremental audience gains on Nine's AVOD 9Now and content that is streamed on digital platforms such as YouTube, and social media.

All of the TV networks are grappling with this opportunity that Marks points out is largely “upside” for the TV industry.

“I reckon we're about 50% there in how we are doing it at the moment in terms of results. And if you speak to anyone in our business that is almost a similar focus for a whole bunch of people, turning that 50% into 100%,” Marks explains.

“I think it's also a focus for clients as well; they're starting to understand how they can leverage our business better. Everyone is going along that journey in trying to find the optimal outcome.” 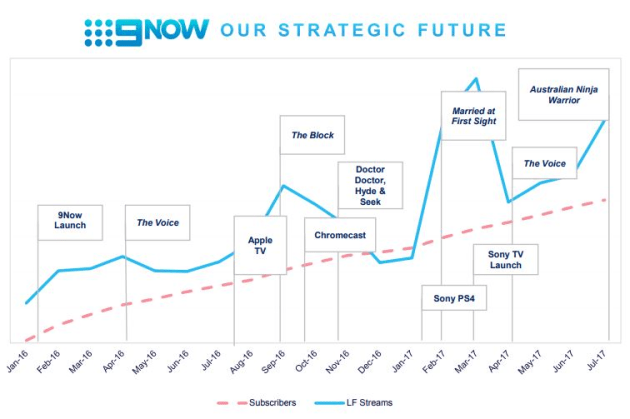 Nine has made some progress in the past year; 9Now revenue is up 38% year-on-year while long for streams has risen 114% (see chart above). This indicates viewing increases on catch-up are accelerating much faster than revenue gains.

The rise of connected TVs should help drive these commercial opportunities - in the past four years the household penetration of connected TVs has increased from 23% to 37% - but Marks concedes the TV industry needs to work out a standard metric to properly commercialise this audience.

“The industry hasn't quite worked out the accountability of what those numbers are,” he says.

On track to win demos

Nine is on track to win the main advertising demos it sells against across the survey period provided The Block continues in its current ratings trajectory.

This is a huge turnaround on 2016, when Seven had the ratings survey year in total people wrapped up by late August.

After the Olympics, The Block helped power Nine home in 2016, but it was at an epic five-hour upfront event in November when Marks, and just about every on air talent at his disposal, made a brash statement that 2017 would see a huge turnaround with 50% more local content in its schedule.

The success of shows like Married and Ninja has provided advertisers who backed these formats with a bit of extra value against plan. Importantly, it places the network in a stronger position to improve yields against tent poles in the current fiscal and beyond in a TV advertising market that has declined by 3.5% in FY17.

“We've received some benefit in the short term but certainly in our planning we are looking to commercialise that over the course of FY18 that we're in now and even into FY19 when we grow our advertiser relationships as we grow our ratings,” Marks says.

“Some clients have got some really cheap deals in the end with some of the performance against ratings expectations. That's great for them and an opportunity for us to do better on yields for some of those programs over the next couple of years.

“We will focus on that more as one business into the future.”

As linear audiences continue to fragment, Nine's ability to combine and commercialise its traditional broadcast TV business and digital assets will become increasingly important to its success in the future.