How APN Outdoor plans to win back market share

The roll-out of digital out of home assets is coming towards the “end of the runway” and the industry needs to work on hygiene factors, such as evolving audience measurement for the digital age, for it to really progress, according to APN Outdoor’s CEO James Warburton.

Australia’s second-largest out of home company in revenue terms is focused on installing assets on quality sites over quantity and improving how it uses data and location-based technology to help advertisers make the most of digital networks.

Warburton recently sat down with AdNews to share some light on his plans for the outdoor company this year.

Although not fully formed – Warburton has only been at the helm for a few months – his immediate vision is clear, to grow the network at strategically important high impact sites, improve measurement and roll out new data and tech products that drive creative and effective outdoor solutions.

“When you look at it, it probably is getting towards the end of the runway, so to speak, in terms of digital roll out,” Warburton says.

“Buyers have enjoyed the digital ride but now you're at that point ­– no different to the TV networks when they rolled out multi-channels ­– where all this extra revenue gets to an inflection point.

“It's probably been a bit of an arm's race in building as much digital as possible and what can be approved. Our approach in 2018 is much more around specific geographies – so, building panels in Adelaide and Perth and New Zealand, and in individual places like the Gold Coast, where's there's not a lot of inventory. It’s about reach building and it’s about pretty exclusive sites.”

Last year, APN Outdoor installed 38 large format digital screens of which 27 were conversions from static sites. This year, the plan is to install between 20 to 25, including 14 in the first half. A key difference, Warburton points out, is that many of these will be built on greenfield sites, such as new overhead bridges.

An example is an overhead on the Southern Freeway in Adelaide where there is not a lot of inventory entering the city.

“It is going to be a very specific build as we go forward,” he adds. “They're still returning well in terms of overall capital and revenue per board going up, but we've got to get to hygiene factor right first.”

By hygiene factor, Warburton means sorting out digital measurement – an issue the outdoor industry is grappling with this year.

Updating MOVE, which measures traffic at specific site, has been held back by several factors. Firstly, it is only in the past 12 to 18 months that the digital network had grown to a scale to become a mass reach placing greater scrutiny on how media spend is measured. In 2017, digital revenue now accounts for 47% of the industry’s overall pie, about $373.4 million.

Improvements to measurement have also been held by the fact the various tiers of government have been slow to set road regulations on what is acceptable to display on roadside billboards.

For Warburton, who has a background as a media buyer and working in the upper echelons of TV, getting the measurement piece right is critical for the out of home sector to increase its market share.

“If you don't have the measurement then you don't have the uplift effect of a digital billboard in the buying community. We’ve rolled out close to $300 million dollars’ worth of capital across all the players, you've got to get that hygiene factor right first.”

APN Outdoor has also committed to independent campaign proof of placement platform Seedooh, which provides a layer of transparency to the digital out of home space.

Beyond measurement and reporting, the next major focus for Warburton is improving APN Outdoor’s data and technology capabilities, with further announcements about this earmarked for June.

Warburton remained tight lipped when pressed about details, but told AdNews it was about helping clients get the most out of the medium through the better use of data to help advertisers reach specific audiences as well as innovations that drive creativity.

“The goal and objective is to give them much deeper, transactional data and segmentation laid against all of the sites,” he says.

“So, it gives them a much more complex data set versus just saying, ‘here are the Move numbers or here's the reach in frequency’,” Warburton says.

“That's very much phase one. Then there's the pure profile Iris product as well in terms of mobile connectivity. Where you go and what you talk about mobile connectivity attribution – and some parts of that may be a way off, such as programmatic, ­but we have to very quickly get our head around coming back into a leadership position and then leading.” 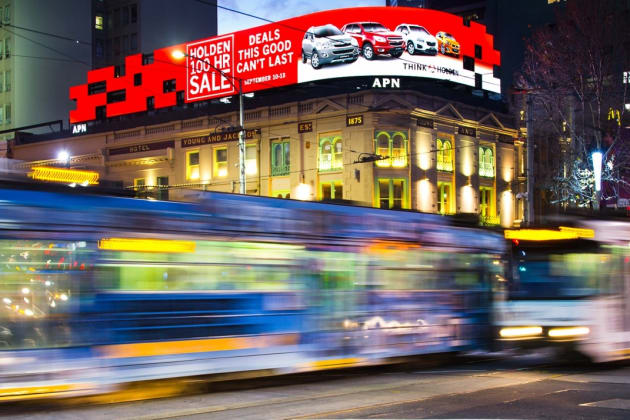 Getting back into a leadership position won’t come easy. Warburton is aware that APN Outdoor lost ground on its major rival, market leader Ooh!Media, as a result of a failed merger between the two companies last year and a transition of leadership from long-serving leader Richard Herring to the new guard that he leads.

This was partly reflected in the financial performance of both companies in the past year in which APN Outdoor’s revenue growth of 4% lagged behind Ooh!Media’s 13%.

“This is catch-up mode for us,” Warburton admits. “This is about us having a product as good, equal to or better than our competition, and being used properly across the sales team, not just by request, but at a scale that is meaningful for clients.”
Warburton says it’s also about positioning APN Outdoor as a premium media provider in what is an increasingly competitive media industry.

“But this goes back to my point about quality not being rewarded. You look at our sites and you look at the quality of what we're building, and our sites should actually be rewarded over digital at any price.”

To get there will require APN Outdoor to bring its own house in order as well as the industry evolving audience measurement.

Even though the out of home sector may be approaching the end of the runway in terms of digital, further advancements, such as programmatic trading and selling inventory by time zone could present new opportunities.

“I actually think there's another trajectory point for us and there's an ability to turn on a lot more digital inventory at the right time. But as I said before, we'll be very specific about what we do in the short term," he says.

AdNews takes a deeper dive into how the out of home sector plan to bring measurement into the digital age in our May issue of the magazine. You can subscribe to AdNews and support our independent journalism for less than $5 per issue.