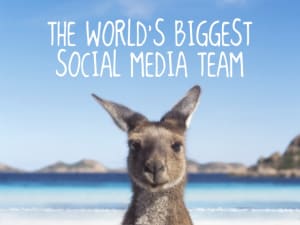 Tourism Australia wants the entire tourism industry to join its social media team. That's almost 1 million people. The aim is to make Australia the world's most talked about tourism destination. And the agency is sharing its social media guidelines to realise its ambitions, boost the economy and claim the number one slot.

Australia was already the number one destination on Facebook (four million fans), Google+ and Instagram in 2012. But this was not just about claiming top dog status on Twitter too.

"It's broader than that, it's about engaging everyone," spokesman Leo Seaton told AdNews. "We have a very small [in house] social media team but they are much sought after [by industry] in terms of advice."

That is where the social media tool kit comes in, he said. "There are some 300,000 businesses in the industry, we're tooling them up to give them an opportunity to help themselves."

The push, slipped out quietly on Friday with no announcement or fanfare, attracted 40,000 views over the weekend. "It's already taking effect," Seaton said.

The steps in the social media guide are: to let fans become content heroes; pick the big and small 'waves' to surf; give people stories to tell themselves and their social networks; and embrace new ideas, but test them first and learn from them.

Tourism Australia MD Andrew McEvoy said harnessing the smaller firms that make up 78% of the tourist industry would both increase tourism, and level the playing field for businesses that traditionally could not compete with big marketing budgets.

“If I own a hotel and someone tweets or posts about it on Facebook, they’re advocating for my business. This makes everyone who comes through the door a potential fan and advocate," said McEvoy.  "We see the same opportunity from everyone that visits our shores and the industry can help itself by embracing the power of social media.

“In tourism promotion, compelling content is king. Our job at Tourism Australia is as creator, co-creator, curator and syndicator of this content. The more operators willing and able to become part of our social media team, to share their great tourism experiences and demonstrate Australia as an aspiring travel destination, the better."