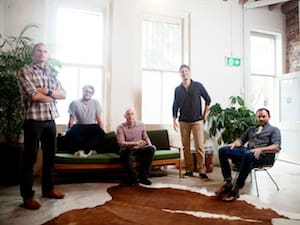 EXCLUSIVE: The fix is in, design agencies are the future of the creative industry, and The Monkeys partners want to get in from the ground floor. So they've taken a stake in acclaimed design agency Maud.

The Monkeys partners Mark Green, Scott Nowell, Justin Drape and Fabio Buresti have become partners in a second agency, Maud, which will work alongside their creative shop in the same office block.

Maud has already worked with brands like Carlton & United Breweries, Nokia and NRMA Insurance, while the partnership between the two companies has seen work produced for brands like The Star, Tony Ferguson, Diageo, Ikea, Semi-Permanent and others. A high profile project for Google and the Semi-Permanent event in Los Angeles is also currently in the works.

The Monkeys boys have partnered with Maud's founder and creative director David Park. While they have been tight-lipped about the exact split of ownership, Green said it is divided between the five players “fairly evenly”.

Interestingly, it was the four partners from The Monkeys who bought into Maud, rather than The Monkeys as a business. But Green said it doesn't make too much difference, and said the design agency has been working very closely with The Monkeys' clients, while also retaining its own business.

Truth be told, the deal has been in the works for around a year, and the two agencies have been working in a partnership under the radar for several months. Green said: “We've been doing this quietly for some time, working together on a number of projects.”

Green said the “design conversation” is one which brands have very early on, and suggested that this new venture will provide access to clients much earlier in the creative process. He argued design is a major opportunity for the Australian creative sector, and suggested it is a field which is largely untapped.

“Design is not taken seriously enough in this market,” Green said. “The design market in Australia seems to be the same parties and a few smaller design studios. But when a business takes design seriously, you see a major impact. Just look at Apple as one example.

“From a design point of view you are involved in the inception of a product and the initial brand strategy. To play in that space opens up so many creative opportunities.

“If you look at what design can truly offer, it shapes a consumer's interaction with a product and a business, it's more than just pretty colours. It is integral to brand strategy and brand identity.”

Since The Monkeys partners bought into Maud, it has grown from a relatively small design shop into an operation with approximately 12 staff. The agency has brought in a design director Jamie Mitchel, who has joined the business from Staat in Amsterdam where he worked on Nike. Business director Nick Jackson has also joined Maud from The Monkeys, where he was senior account director.

“Now there is a good sized team which will allow Maud to up the scale of its projects,” Green said. “Now it can work on bigger brands and bigger projects.”

Meanwhile, Maud's founder David Park said: “Why The Monkeys? We have a similar view of how communications and design could and should work. A non-traditional view which is more involved in brand strategy. It's not just design as pretty pictures, but design as brand strategy, ideas and execution.”

This story originally did not make clear the nature of the transaction. The Monkeys partners have now clarified that there was a financial element to the deal.